The images shows that the rubble is continually smouldering since the explosion on February 13 as it is visible from space. 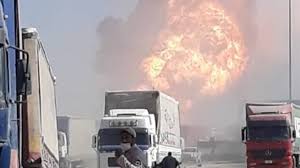 Satellite images has shown the impact of the deadly fire which took place at a border between Afghanistan and Iran’s Herat province, Afghanistan’s Islam Qala. The fire took place on February 13 that engulfed more than 500 trucks into it and around 60 people were injured.

The images shows that the rubble is continually smouldering since the explosion on February 13 as it is visible from space. These images are taken by Maxar’s WorldView-3 satellite and were clicked on Wednesday.

The trucks which got burned were carrying fuel and natural gas.

The border is a habitat for millions of Afghanistanies and as a special subsidy the United states allows Afghanistan to import oil and fuel from Iran.

The fire affected so fiercely that Afghanistan had to shut down its electrical supply from Iran which left the Herat in dark.

“Around $50 million of damage has been caused by the fire, but a more accurate figure will be available in the coming days,” giving an idea about the damages, said the head of Herat Chamber of Commerce Younus Qazi Zada.

“The catastrophe was much bigger than imagined,” he added.

The Qala border is located at the dangerous stretch of Highway at 120 km west of Herat where Taliban roam freely.

Several videos have gone viral on social media showing the fire and the clouds which turned into black smoke.