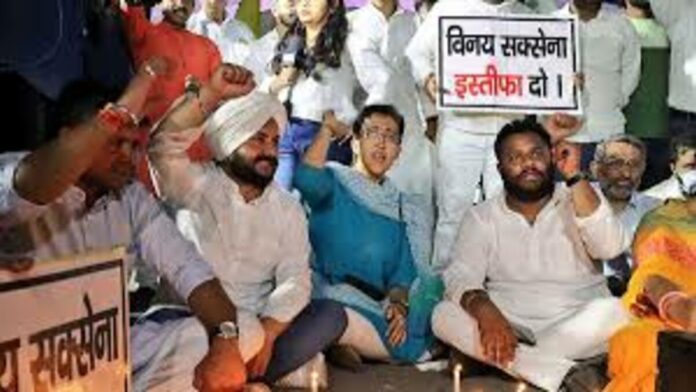 The Delhi Assembly is experienced a sleepless night as both the Delhi ruling AAP and Opposition BJP stood outside the promises alleging each other throughout night.

Amid the exchanges of allegations, the leaders from Aam Aadmi Party said the Delhi Lieutenant Governor Vinai Kumar Saxena had forced his employees to exchange domesticated notes amounting to ₹ 1,400 crore back in 2016 when he was handling as the Chairman of Khadi and Village industries Commission.

Meanwhile, the BJP sought for sacking of Satyendra Jain and Manish Sisodia over the allegations of corruption.

As soon after the AAP accused the Delhi Lieutenant Governor of money laundering during the demonetisation, the BJP in its response said that the accusations against Mr Saxena is a clever way to avoid answers over the ongoing controversy in connection with the alleged liquor policy and construction of schools in the national capital.

Mr Saxena has even suggested a CBI investigation into the allegations of corruption in the Delhi Excise Policy 2021-2022. In response of which the ruling AAP government has accused him of “interfering” in the workings of government.

In their sharp movement against the Delhi LG, the AAP MLAs raised slogans holding placards and demanded action against him. They said, despite being aware of the corruption allegations against Mr Saxena, centre still chose to appoint him for the post.