Rishi Sunak Front In Race To Become UK Prime Minister, As He Tops In 3rd Round Of Voting 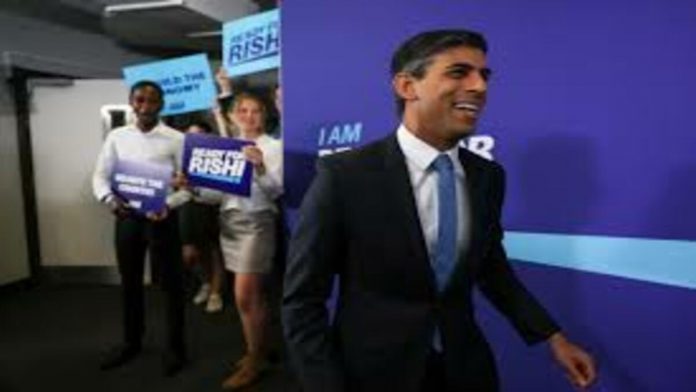 In the most recent round of voting by Conservative MPs on Monday to choose Britain’s next prime minister, former finance minister Rishi Sunak increased his lead, while the battle to make the last two narrowed.

When there are just two candidates left, MPs will continue to vote, and the party members will then choose the winner.

Prior to the weekend, Mordaunt was the betting favorite, but she lost support from the previous round.

A tight struggle to make the final cut on Wednesday is anticipated after Foreign Secretary Truss trimmed the deficit to 11 and may likely anticipate further support shifting to her from Badenoch’s supporters should the rebel candidate be removed in the next round.

After Sunak and Truss withdrew, television executives decided to cancel the planned discussion between the remaining candidates for Tuesday night, according to Sky News, which was scheduled to moderate it.

After a government uprising against his scandal-plagued administration, Prime Minister Boris Johnson announced on July 7 that he was resigning as the leader of the Conservative Party.

He will continue serving as prime minister until the announcement of his replacement on September 5.

The candidates argued sharply in the two previous debates that were broadcast on television, on Channel 4 on Friday and the ITV network on Sunday, over whether to reduce taxes to help relieve the rising cost of living crisis.

However, Sunday’s debate became more heated — and personal — as contenders were urged to openly disparage one another and their plans.

Truss received criticism from Sunak for her vote against Brexit, her prior membership in the Liberal Democrats, and her stance on taxes.

Truss, in turn, questioned Sunak’s management of the economy.

In the “culture wars” waged by the Tory right, Badenoch attacked Mordaunt for her stance on transgender rights.

The debates were compared to a “political version of ‘The Hunger Games,'” according to Paul Goodman of the ConservativeHome website, who also questioned why they had consented to it.

He wrote: “Several of the contenders hurled buckets of dung over each other, and Tory MPs and activists will have watched in terror.”

He questioned their decision to publicly criticize the actions of the government—all but one of them—or the positions they took as ministers.

Johnson must leave right away, according to the main opposition Labour party.

Keir Starmer, its leader, referred to the candidates’ resignation as a sign that the party was “out of ideas (and) out of purpose.”

Pulling out of a TV debate while running for prime minister, he continued, “doesn’t demonstrate very much confidence.”

By moving forward its own confidence vote on the administration as a whole, the government overruled Starmer’s attempts to convene a confidence vote in parliament to quickly remove Johnson.

Johnson defended his government’s track record during the debate by pointing to the vaccine rollout and backing for Ukraine.

“I think this is one of the most dynamic governments of our time, delivering amid difficulty, not simply overcoming adversity on a scale we haven’t seen in generations.”

Former Labour leader Jeremy Corbyn made light of the fact that his former opponent was leading legislators on a “fantasy tour of this country” in his joke.

In Downing Street, Starmer referred to the departing leader as a “vengeful squatter.”