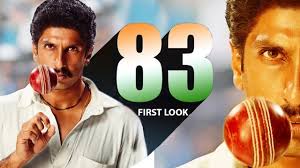 After much speculation the release date of Ranveer Singh, Deepika Padukone and Boman Irani-starrer ‘83‘ has been made official. Singh announced via social media that the sports drama centred around the Indian cricket team’s 1983 world cup win would release on 4 June.

83 directed by Kabir Khan was scheduled to release in April last year but was stalled because of the pandemic and resultant lockdown. Singh essays the role of cricketer Kapil Dev in the film while Padukone plays his wife Romi Bhatia. Other cast members include Tahir Raj Bhasin as Sunil Gavaskar, Saqib Saleem as Mohinder Amarnath and Sahil Khattar as Syed Kirmani.

The actors trained for the film in April 2019 by attending a cricket camp at the Dharamshala Cricket Stadium with former cricketers Balwinder Sandhu and Yashpal Sharma. Ranveer Singh said that he stayed with Kapil Dev at his residence in Delhi to get to know the cricketer better. Dev also personally trained Singh with some of his special cricket moves before filming started.

The film is co-produced by Reliance Entertainment, Phantom Films, Kabir Khan, Vishnuvardhan Induri and Sajid Nadiadwala. 83 is one of the first big budget releases that have been announced for a release this year. Shot at various locations in India and the UK, 83 started filming in May and wrapped up by October 2019.

83 will be a multilingual release in Hindi, Tamil, Telugu, Malayalam and Kannada. The Tamil and Telugu rights of the film were bought by Kamal Haasan and Akkineni Nagarjuna respectively.