Rahul Opens Up Against The Criticism Over Dynastic Politics, Said ‘Proud Of My Father And Grandmother’

Congress leader Rahul Gandhi said it's a matter of pride that his grandmother and his father had been killed because they stood up for something. Gandhi also said that, as a leader, trolls help him improve himself. 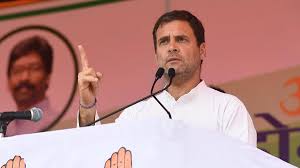 Rahul Gandhi said, “I’m proud that my grandmother and father were killed while standing and defending something” during a virtual interaction with Dipesh Chakrabarty of the University of Chicago.  He added, “It helps me understand them and my place and what I should be doing. There are no regrets.”

Rahul Gandhi is visiting Rajasthan, where he will hold Kisan rallies with the Congress of Rajasthan.

Rahul Gandhi also referred to criticism of dynastic politics and said  it has been over 30 years that a member of his family was the prime minister.

Chakrabarty asked Gandhi that the issue of dynasty is posed when the fall of Congress is addressed, and how he relates to this as someone who is seen as belonging to a dynasty.

It’s fascinating to me because the last time a member of my family was a prime minister was 30+ years ago.

Speaking on his political path, Rahul Gandhi said, “As I have gone further in this journey, there is more crystallization of those ideas.” If you were to ask me why 15-20 years ago I was going to think of entering politics, my response would be very different from what it would be today.

“As I go further, there is a battle of ideas going on. As the other ideas attack me, it helps me refine myself. Trolls sharpen my sense of what I have to do. They are almost like a guide to me; they tell me where I have to go and what I’ve to stand for. It’s an evolution,” said Rahul Gandhi on the frequent social media backlash and trolling meted out to him.

Rahul Gandhi has been criticizing the Modi government over issues ranging from the farmers’ protest to the border situation in Ladakh over the past few days.

Rahul Gandhi addressed the media on Friday and hit out at the Centre over the remark by Defense Minister Rajnath Singh on the current situation at the border with Ladakh and said the Modi government had handed over a piece of Indian territory to China.

On Friday, during a live interaction with historian Dipesh Chakrabarty and University of Chicago students, a major earthquake struck large parts of northern India. As the tremors were felt, Rahul Gandhi said briefly, “By the way, I think there’s an earthquake going on.”