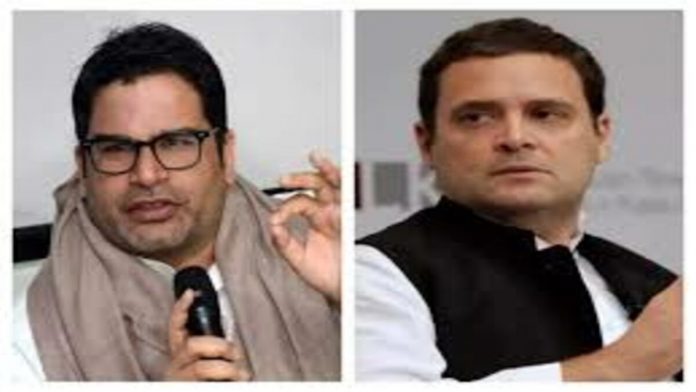 According to party sources, Rahul Gandhi predicted Prashant Kishor would not join the Congress “on Day One,” and many officials believed the strategist sought to “exploit the Congress” to gain leverage with other parties. Sources close to Prashant Kishor replied that the doubts and worries were mutual.

Two days ago, Prashant Kishor, also known as PK, was given the functional responsibility of election management in the Empowered Congress Committee. He turned down the offer on Tuesday.

“The invitation to join the Congress was extended to PK the day before yesterday. He declined. We have no idea why “Prashant Kishor’s Congress revitalization proposal was reviewed by a group led by senior leader P Chidambaram.

According to insiders, PK wanted to be either the Congress president’s political secretary or the Vice President.

“Rahul Gandhi indicated PK would not join on Day One, and this isn’t the first time he’s been offered a position in the party,” insiders claimed. Indeed, others speculated that this was the strategist’s seventh attempt to enter the Congress.

According to the sources, it was PK who approached Congress leaders and requested a meeting to outline his strategy for resurrecting the grand old party.

Following Rahul Gandhi’s rejection of his overtures, PK is said to have insisted on meeting with Priyanka Gandhi Vadra.

“Several Congress leaders in the committee gave his proposals serious thought, but were weary of PK,” they stated. Two Chief Ministers have also been summoned to meet with him.

Many in the group evaluating PK’s proposal thought he was untrustworthy and planned to collaborate with other parties while using the Congress platform.

Prashant Kishor said he is “not a key shareholder in IPAC” and that the group would not do anything that “I tell them not to” in order to distance himself from his group I-PAC and address worries about whether he would preserve his exclusive relationship with the Congress.

According to sources close to Prashant Kishor, he had serious doubts about the Congress leadership’s commitment to making difficult decisions to resurrect the party. Even while they looked to endorse his goals, they stated he didn’t believe the Congress and its leadership were invested enough.

Rahul Gandhi’s international trip at the time further added to the scepticism. Instead of taking a “hands-on” approach, Rahul Gandhi, one of the Congress’s top decision-makers, appeared “aloof” and rarely attended meetings, according to individuals close to PK. When he could have postponed his planned trip overseas until the party’s reckoning, he preferred to travel.

According to reports, Rahul Gandhi’s perceived remoteness contrasted with Priyanka Gandhi’s constant presence at every meeting, but that wasn’t enough. The Congress president, Sonia Gandhi, was also present throughout the discussions. Given the party’s history with PK in the 2017 Uttar Pradesh election, which it lost, even Priyanka Gandhi was undecided.

One of the major stumbling blocks in the Congress-PK talks was the party’s preference for gradual adjustments rather than big-bang measures that may anger many leaders. According to insiders, Prashant Kishor was likewise unwilling to settle for committee membership. The ace strategist, who had previously had direct contact with leaders such as Narendra Modi, Nitish Kumar, and Amarinder Singh, wanted direct access to Sonia Gandhi and a free hand to carry out his plans for India’s oldest political party.