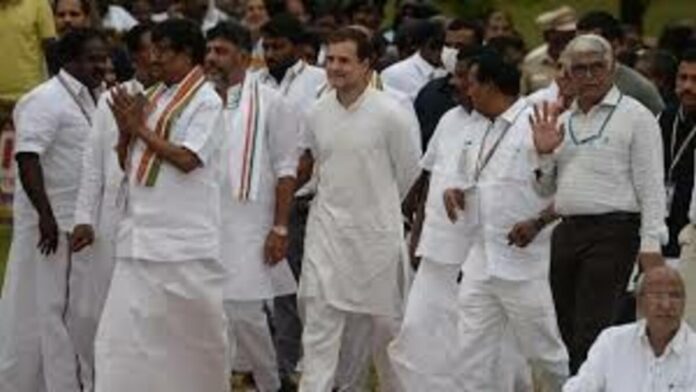 Rahul Gandhi, the Congress party’s scion in India, has begun a 3,500-kilometer march across the nation in an effort to boost his group’s standing and take on Prime Minister Narendra Modi in elections less than two years away.

Gandhi, 52, and hundreds of his party supporters will travel across 12 states during the five-month “Unite India” trek, starting at the most southernmost point of India and ending in Kashmir in the very north. In advance of the 2024 general elections, it will bring attention to the Bharatiya Janata Party’s allegedly socially divisive agenda as well as the rising inflation and unemployment rates.

In the 2014 elections that brought Modi to office, the Congress party suffered its worst-ever defeat and is currently working to make up lost territory. When it won a second term in 2009, it had 206 seats in parliament. As of right now, that number is down to 52. In municipal polls, it hasn’t performed any better, losing 39 of the 49 state elections since 2014.

Gandhi declared, “Almost all the roads for us have been barred,” during a rally on Sunday in New Delhi. “The last remaining option is to travel among the populace and inform them of the country’s truth.”

The march, during which Gandhi expects to complete a gruelling 23 kilometres per day, is intended to help the party interact with people. The government has been accused of interfering with its ability to hold protests and demonstrations.

Gandhi worshipped at a monument in Sriperumbudur, Tamil Nadu, in the southern state, where his father Rajiv Gandhi was killed in 1991, just like his grandmother Indira had been seven years earlier.

“The politics of hatred and division cost me my father. Gandhi, 52, declared on Twitter, “I will not lose my beloved country to it, either.

“Price increases continue even when our children cannot work. Therefore, we are entering a difficult period, declared Gandhi on Wednesday at the beginning of the march in Kanyakumari. And it is crucial that we unite the Indian people and keep them that way in order for India to be strong.

Despite Gandhi’s lack of a formal role inside the party, he is seen as the next in line to the Nehru-Gandhi dynasty that has long ruled India’s Indian National Congress, a group that was formerly connected to the country’s freedom movement. Since gaining independence from Britain in 1947, the party has dominated the South Asian nation for more than five decades.

A recent poll revealed that despite a rocky second term in government, nearly 53% of respondents still support Modi as prime minister. In comparison, only 9% favour Gandhi holding the position of president.

Over the past few years, top officials have left the Congress party, which will also pick a new president next month. Gujarat and Himachal Pradesh, which will hold elections at the end of the year, are also excluded from Gandhi’s statewide march.