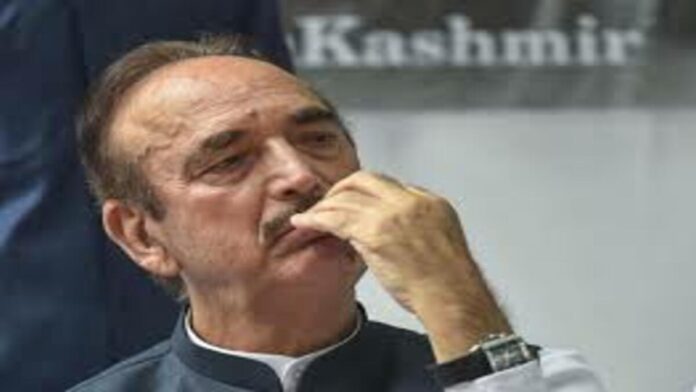 In an exclusive interview, veteran politician Ghulam Nabi Azad, who just left the Congress, claimed that Rahul Gandhi was only useful for dharnas and photo opportunities, not for the organization.

Rahul Gandhi was blamed by Ghulam Nabi Azad for “demolishing” the party’s whole consultative process and pushing it past the point of no return, marking the end of his five-decade connection with the organization.

“Whom am I to blame? Rahul Gandhi had to take the responsibility because he made no attempt. My intention was to summarize everything in a letter before continuing. However, the party made false accusations in an effort to incite me “told a news organization Ghulam Nabi Azad.

“Rahul Gandhi lacks commitment to rebuilding the organization. He is suitable for public rallies, dharnas, and photo opportunities. These are solo performances, “Every Congressman is aware that choices are made by either Rahul Gandhi or his bodyguards and personal assistants, according to Azad, who added that.

“You cannot make Chowkidar Chor Hai an election topic at every public meeting you go to. I disagreed with the Chowkidar Chor’s agenda. Was there no problem with unemployment and price growth?” Added Azad.

Ghulam Nabi Azad dismissed charges that he was aligned with the BJP and asserted that members of the venerable party are supporting the “Congress Mukht Bharat” (Congress free India) campaign.

“I’m not carrying out that plan. If I had been pursuing the BJP’s goal, I wouldn’t have made recommendations or asked for reforms for nine years.

Azad had claimed on Friday that the Congress leadership was defrauding the party in the name of “farce and sham.” “internal surveys

He had claimed that all of the party’s senior and experienced leaders had been removed, and that the new clique of inept sycophants had taken over.