The Congress leader Rahul Gandhi attacked the Modi government by saying, “Narendra Modi has hand over the ‘Bharat Mata ka tukda’ to China”. 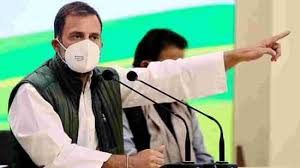 The Congress leader Rahul Gandhi on Friday slammed the Union Defence Minister Rajnath Singh after his statement on Ladakh situation and also alleged Modi government for handing over a piece of Indian land to China. He also slammed the Centre for not allowing Opposition to even question about it.

He further questioned, why the Indian troops have been asked to move back and also attacked the Modi government by saying, “Narendra Modi has hand over the ‘Bharat Mata ka tukda’ to China”.

Rajnath Singh in his statement said, “India and China have reached an agreement on disengagement in the North and South banks of Pangong lake in eastern Ladakh that mandates both sides to “cease” forward deployment of troops in a “phased, coordinated and verifiable” manner”.

“China will pull back its troops to east of Finger 8 areas in the northern bank of Pangong lake while the Indian troops will be based at their permanent base at Dhan Singh Thapa Post near Finger 3 in the region,” Singh added.

Not just Rajnath Singh the Congress leader Rahul Gandhi also attacked the Centre by saying, “Yesterday, Defence Minister made a statement on the situation in Eastern Ladakh. Now, we find our troops are now going to be stationed at Finger 3. Finger 4 is our territory. Now, we’ve moved from Finger 4 to Finger3. Why has Mr Modi given up our territory to the Chinese?”

Giving his analogy Gandhi also said ,“The Defence Minister didn’t speak a word on the most important strategic area – Depsang Plains – from where China had entered. The truth is that the Prime Minister has given away the Indian territory to China. He must answer to the country”.