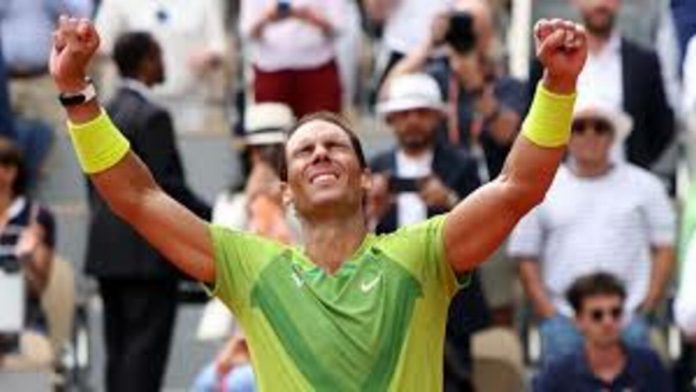 Rafael Nadal broke Andres Gimeno’s record of 34 years and 305 days set in 1972 by becoming the oldest man to win the Roland Garros title. It’s also the first time in Nadal’s career that he has won both the Australian Open and the French Open in the same season. Earlier this year, the Spaniard won his second Australian Open title, defeating World No. 2 Daniil Medvedev in the final in Melbourne.

On Sunday, Nadal defeated 8th seed Casper Ruud 6-3, 6-3, 6-0 in the men’s singles final in under 2 hours and 18 minutes. After decimating his academy classmate Ruud in the last set, Nadal earned his 21st bagel at Roland Garros and third in the Paris final.

Nadal seemed nervous as he surrendered a break in the first set, even as Ruud, who practises at Rafael Nadal Academy in Mallorca, was suffering with jitters in his maiden Grand Slam final.

Nadal, on the other hand, used all of his experience to win the first set 6-3 in 51 minutes. As the light began to shine in Paris, Nadal found a new gear that improved his stroke play. As Nadal came back from a 1-3 deficit to win the second set 6-3, his forehand shots were ripping past the net.

Once Nadal was two sets up, there was no stopping him, as the Spaniard won 11 games in a row to beat Ruud in the final set and write history.

With his triumph at Roland Garros, Nadal now has 22 Grand Slam championships, two more than Roger Federer and Novak Djokovic, who both have 20. Notably, in the quarter-finals last week, Nadal defeated Djokovic in four sets en way to victory in Paris. Djokovic was seeking vengeance after losing to Nadal in the Roland Garros semi-finals last year in four sets.

Olympic gold medalist Neeraj Chopra stated on Sunday that while winning medals is fine, humility and respect for others are more crucial.When he won...
Read more
SPORTS