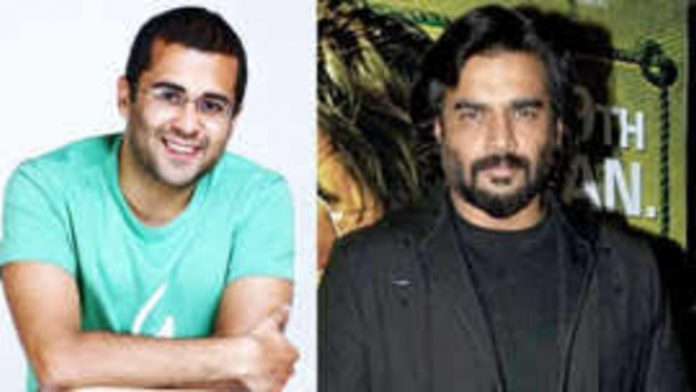 Actor Madhavan and author Chetan Bhagat got into a playful argument, which subsequently turned out to be a publicity stunt for Decoupled, a new Netflix comedy. Madhavan, who plays India’s second-bestselling author, is continually pitted against Chetan, who plays himself, in the series.

“YES! Madhavan responded with multiple laughing emojis, “3 Idiots.” He played an engineering student in the film, which was based on Chetan’s book Five Point Someone. Madhavan was asked not to ‘preach to the choir’ by Chetan. “You’re showing me three idiots?” Instead of preaching to the choir, perhaps you should read one of my works.” If he was partial to literature, the actor questioned the author why he acted in Decoupled.

“HAHAHAHAHA, what an unsubtle plug, maybe it’s just me, I prefer a Pulitzer over a pan masala branded award show,” Chetan said, while Madhavan retaliated with, “Well I prefer the 300 Crore Club over Bestseller.”

Chetan stated that he would rather be recognised by his first name than “Farhan from that one movie.” “I’m not simply known as Farhan,” Madhavan replied. Because I live in everyone’s hearts, I’m also known as Manu from Tanu Weds Manu, Kartikh from Alaipayuthey, and my personal favourite, Maddy kyunki mein rehta hoon sab ke dil mein.” The last remark was a reference to his debut Bollywood film, Rehnaa Hai Terre Dil Mein.

Madhavan and Chetan exchanged pleasantries at the conclusion of their verbal sparring. “If this were a writing test, I’d say you aced it.” But, to be honest, how did you like my Netflix debut?” Chetan penned an essay. Madhavan joked that the author, like his works, is ‘better on the big screen,’ but added that he was ‘great’ in the show.

Madhavan later said that they were ‘performing a publicity game’ and that ‘of course, it’s scripted.’ “<3 you bro!” Chetan exclaimed.