Punjab Receives Lowest Voting With 4.07% In Bypolls Held In All 5 States And 1 Union Territory 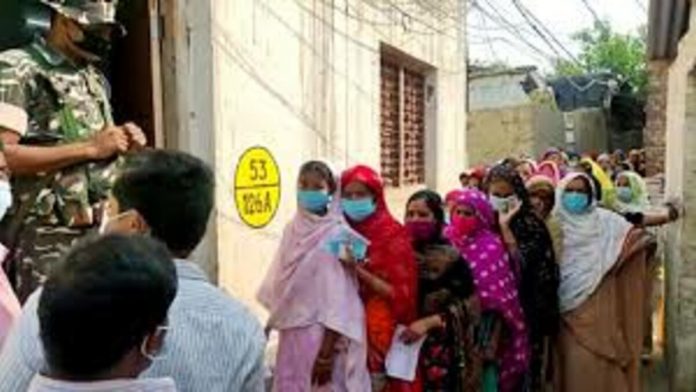 On Thursday, voting took place in five states and one Union Territory for three Lok Sabha seats and seven assembly seats. Azamgarh and Rampur in Uttar Pradesh, as well as Sangrur in Punjab, were among the Lok Sabha seats that were up for election. Rajinder Nagar in Delhi, Mandar in Jharkhand, Atmakur in Andhra Pradesh, Agartala, Town Bordowali, Surma, and Jabarajnagar in Tripura are the locations of the assembly seats.

Only 4.07 percent of eligible voters used their right to vote in Sangrur, Punjab, in the first two hours of voting for the three Lok Sabha seats, compared to 7.86 percent in Rampur, Uttar Pradesh, and 9.21 percent in Azamgarh.

According to election officials, approximately 14.66 percent of the 1.89 lakh eligible voters in Tripura cast ballots in the by-elections for four assembly districts up till 9 am.

Azamgarh, Rampur, and Sangrur in Punjab are the three Lok Sabha seats up for election. Rajinder Nagar in Delhi, Mandar in Jharkhand, Atmakur in Andhra Pradesh, and Agartala, Town Bordowali, Surma, and Jabarajnagar in Tripura are the seven assembly districts.

The voting started at 7 p.m. and will continue until 6 p.m. Voter tallies will be tallied on June 26.

Tight security was in place when voting for the Rajinder Nagar byelection in Delhi began. For the key assembly constituency, it is mostly considered as a contest between the Aam Aadmi Party (AAP) and the energetic Bharatiya Janata Party (BJP).
In the bye-election, where 14 candidates are running, a total of 1,64,698 people are entitled to cast a ballot.

After recently been elected to the Rajya Sabha, AAP leader Raghav Chadha vacated the seat, necessitating the election.

Raghav Chadha, an AAP Rajya Sabha member, voted at the election. In an interview with reporters, Chadha expressed confidence that Rajinder Nagar residents will once more choose to support his party’s nominee. “I am convinced that even in the future, bearing in mind the job done by our government, and done by me as an MLA for about 2 years, people of Rajinder Nagar assembly seat would once again give chance to a party, to a person, who will not let this pace slow down,” he said.
People will vote to ensure that there is no corruption in government and that everyone has the opportunity to live in dignity, said Chadha.

Durgesh Pathak, a candidate for the AAP, is running against Prem Lata of the Congress and Rajesh Bhatia of the BJP to fill the seat left vacant by Chadha.
The byelection takes place while the opposition is attacking the Arvind Kejriwal-led administration for its stance on alcohol.

Additionally, voting started in the Lok Sabha constituencies of Azamgarh and Rampur in Uttar Pradesh, which are regarded as the strongholds of the opposition Samajwadi Party (SP) in the state.

The resignation of SP leader Akhilesh Yadav, who won election as an MLA to the Uttar Pradesh Legislative Assembly earlier this year, forced a byelection for the Azamgarh seat. Senior SP leader Azam Khan, who was also elected to the state Assembly, vacated the Rampur seat.

The senior SP leader further attributed the administration led by Yogi Adityant for causing chaos prior to the election.

Voting for the byelection in the Punjab region, which is governed by the AAP, began in the morning.

After Punjab Chief Minister Bhagwant Mann ran for the Assembly on February 20 from Dhuri and won, a byelection was required in Sangrur. In the parliamentary elections of 2014 and 2019, Mann won the Sangrur seat. After winning the Dhuri assembly seat, he resigned as an MP.

Gurmeet Singh Meet Hayer, an AAP leader and the minister responsible for higher education in Punjab, voted in Sangrur. “AAP was given a sizable mandate by the people three months ago, and we immediately began to deliver on that mandate. I’m expecting AAP will have a sizable mandate and win “Hayer informed the media.

Tight security was in place as voting started for the by-election for the Mandar assembly seat in Jharkhand.

In the by-election, where 14 candidates are running, more over 3.54 lakh voters, including 1.75 lakh women, are entitled to cast ballots.

The byelection in Mandar was required because Bandhu Tirkey was no longer eligible to serve as an MLA after being found guilty of corruption.

The BJP has placed former MLA Gangotri Kujur against Shilpi Neha Tirkey, daughter of Bandhu Tirkey, while the Congress has fielded Shilpi Neha Tirkey. Deo Kumar Dhan, a BJP dissident candidate, is running as an independent with support from the All India Majlis-E-Ittehadul Muslimeen (AIMIM).

The byelection is important for both the BJP and the ruling coalition, which also includes the Jharkhand Mukti Morcha (JMM), Congress, and other parties. If Congress wins the byelection, the ruling coalition would have succeeded in winning every byelection since the Hemant Soren administration took office in 2019. However, BJP will benefit if it wins the election because it is attempting to schedule a referendum to gauge public opinion over the ruling alliance government.

Agartala, Town Bordowali, Surma, and Jabarajnagar are the four assembly districts of Tripura where by-elections are being held. There are 25 candidates running in the by-election, and a total of 1,89,032 people are entitled to vote.

Sudip Roy Barman and Asish Saha left the BJP and joined the Congress in February, forcing the need for byelections in the Agartala and Town Bardowali constituencies. After BJP lawmaker Asish Das was found to be ineligible by Speaker Ratan Chakraborty and a by-election to Jubarajnagar was required due to the passing of incumbent Communist Party of India (Marxist) MLA Ramendra Chandra Debnath, the Surma seat in the Dhalai district became available.

Amidst strict security measures, voting also started in the by-election for the Atmakur assembly seat in Andhra Pradesh.

The death of the incumbent lawmaker and former industries minister Mekapati Goutham Reddy in February made a byelection in the Atmakur Assembly constituency necessary.