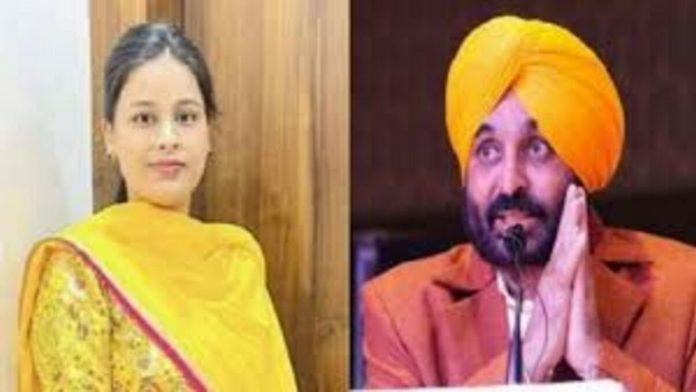 On Thursday, Punjab Chief Minister Bhagwant Mann will wed Gurpreet Kaur, a doctor, at his home in a low-key ceremony with only a few invited guests.

The 32-year-old Kaur’s fellow Pehowa villagers as well as several of Mann’s coworkers looked to have been caught off guard by the news. In fact, 48-year-old Mann had a number of business appointments scheduled for Thursday that have since been canceled.

Kaur is the youngest of three sisters and holds an MBBS from Maharishi Markandeshwar University in Mullana, Ambala. The more established ones reside in the US and Australia. Given that Mann’s mother Harpal Kaur is connected with Kaur’s family, it seems likely that the marriage was arranged.

Residents of Pehowa remember Kaur as a friendly individual who goes by the nickname “Gopi.” A neighbor exclaimed, “The family went for Chandigarh five days ago, but we didn’t realize that Gurpreet was getting married to the Punjab CM!” and added that they were all overjoyed. We are excited that the Punjab chief minister will soon become our son-in-law.

Arvind Kejriwal, the leader of the AAP and the chief minister of Delhi, will attend the wedding as a notable guest. Until Wednesday night, none of the other AAP ministers or MLAs had received invitations, but a few representatives from the CM’s office will be there. According to sources, plans were being prepared for 80 guests, and the site would be set up from 11 am on Thursday. The house had not yet been decorated from the exterior. After the wedding, lunch will be served.

According to AAP sources, Mann would pay for the arrangements out of his own pocket.

Harpal, Mann’s mother, arrived at the CM residence from Satoj, where she is from. According to Malwinder Singh Kang, the chief spokesperson for the AAP, Harpal and Manpreet, Mann’s sister, knew Gurpreet Kaur. There are distant ties between the families. The mother and the bride’s family have been in contact for a while. The CM’s mother, who had been urging him to get remarried, made the match.

Mann will be getting married again. Inderpreet Kaur, with whom he has two daughters, was his first wife. His son Dilshan Mann, 17, and daughter Seerat Kaur Mann, 21, had travelled over from the US to be present at Mann’s oath-taking on March 16 of this year.

In any case, Mann mentioned Inderpreet to a television station on Wednesday, calling her a “very, very good mother” who had raised their children admirably. “I have transferred all I own on this planet into the names of my children,” he continued.

Inderpreet Kaur had stated from the US that Mann was always in her prayers on the day he took the oath of office as chief minister. She had supported Mann during his first parliamentary election from Sangrur in 2014 as a resident of the Barewal village in Ludhiana. A year later, the couple were divorced.

Om Birla, Speaker of the Lok Sabha, contacted Mann to offer his congratulations. Before he became CM, Mann was a two-time Lok Sabha MP.