Protests Should Be Held At Designated Areas Only : Supreme Court

The apex body of court after its verdict in October 2020 identified that "Dissent and democracy go hand in hand," and asserted that "protests like these are not acceptable". 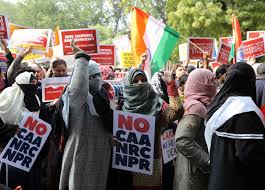 The Supreme Court in an order dismissed a review petition filed in protests against citizenship law 2019 which held at Shaheen Bagh in Delhi said that the right to protest and express dissent also has certain duties and cannot be held “anytime and everywhere”.

The review petition was filed by twelve activists against the Supreme Court’s judgement which termed the Shaheen Bagh protests to be illegal.

The order came on Friday night from a bench of three Justices Aniruddha Bose, Krishna Murari and SK Kaul said, “The right to protest cannot be anytime and everywhere. There may be some spontaneous protests but in case of prolonged dissent or protest, there cannot be continued occupation of public place affecting rights of others”.

The bench also repeated that protests cannot be held at public places and they must be in “designated areas only”.

Last year the apex body of court identified that “Dissent and democracy go hand in hand,” and asserted that “protests like these are not acceptable”.

The Shaheen Bagh had become the epicenter for the anti-citizenship protests in 2019 where the protesters majorly women and children held protests for three months in winter.

The protesters call the new citizenship law 2019 “anti-Muslim” as it snatches citizenship of Muslims and give citizenship to all those religious prosecutors who have migrated from Bangladesh, Pakistan and Afghanistan to India before 2015.