Priyanka Gandhi To Address On Farmers’ Protests In Bijnor

“If voted to power, the Congress will scrap these laws. Farmers will get the MSP (Minimum Support Price). Laws will be made to help you, not oppress you,” said Priyanka Gandhi. 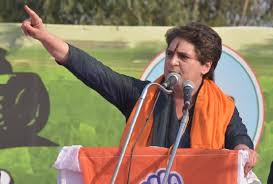 Congress party leader Priyanka Gandhi in a bid to strengthen the roots of Congress in Uttar Pradesh ahead of its state assembly election of 2022 is all set to address a Kisan Mahapanchayat today in Bijnor at the Ramlila Ground of Chandpur.

Recently she has attended a Kisan Mahapanchyat in Saharanpur in which she criticised the BJP government ruling at the Centre. She criticised the move of farm laws by saying, “The three agricultural laws enacted by the central government are monster-like and want to kill farmers,” and also asserted that the laws will be repealed if her party comes to power at the Centre.

“If voted to power, the Congress will scrap these laws. Farmers will get the MSP (Minimum Support Price). Laws will be made to help you, not oppress you,” she said in her statement.

“When the Congress government is formed, laws will not be made to grind you but to help you. We will not do politics with your life. In 1955, Jawaharlal Nehru enacted a law against hoarding, but this law has been abolished by the BJP government. This new law will help the ‘billionaires’ and they will decide the price of farmers’ produce,” she said while addressing at the Kisan Mahapanchayat on Wednesday.

Congress party has planned a series of farmers’ meetings in Uttar Pradesh and it was the first rally presented by Congress. The Opposition is trying their best to revive itself in the state before its assembly polls.