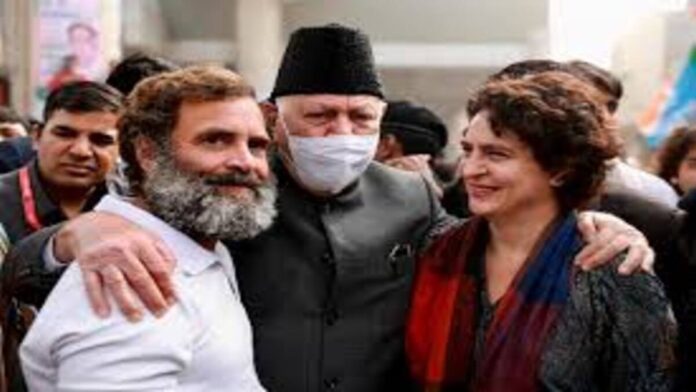 From the village of Mavikala in Uttar Pradesh, the Bharat Jodo Yatra led by Rahul Gandhi began again on Wednesday. Following an early-morning fireworks show at the village, the Yatra got under way. The Yatra arrived in Uttar Pradesh on Tuesday in the late afternoon. It will travel through Niwara, Saroorpoor, and Baraut before stopping at Ailum for the day.

For the following two days, Rahul will walk through Uttar Pradesh. His Yatra will return to Haryana on January 6, and from January 11 to January 20, it is likely to be in Punjab, with a day in Himachal Pradesh on January 19. Party leaders have stated that the Yatra will start on January 20 in Kathua area of Jammu and Kashmir and end on January 30 in Srinagar.

Priyanka Gandhi Vadra, the general secretary of the Congress, hailed the Yatra upon its arrival in Uttar Pradesh, and former Chief Minister of Jammu and Kashmir Farooq Abdullah shortly followed. Priyanka Gandhi praised her brother Rahul at a public event in Loni for doing things like trekking 3,000 miles, “withstanding cold in a T-shirt,” and “not being bought by Ambani and Adani.” On Tuesday, former Research and Analysis Wing (R&AW) chief A S Dulat and Shiv Sena (UBT) leader Priyanka Chaturvedi both took part in the Yatra. Speaking to news agency, Dulat described the Yatra’s walking as a “great” and “amazing” experience.

Rajeev Nigam, a comedian, joined the Bharat Jodo Yatra on Wednesday. Om Prakash Rajbhar, the leader of the Suheldev Bhartiya Samaj Party, has stated that he was invited to join Rahul Gandhi’s Bharat Jodo Yatra through Congressman Salman Khurshid, but he chose against going after consulting with party leaders.

Rajbhar, a former BJP ally, added that in politics, there are no loyal allies or adversaries.

When asked on Tuesday if he might work with the BJP once more, he responded, “No one had envisioned an alliance between the SP and BSP in Uttar Pradesh, Nitish Kumar and Lalu Prasad Yadav in Bihar, and the BJP and PDP in Kashmir.

In a letter to Congressman Rahul Gandhi, Acharya Satyendra Das, the head priest of the Ram Janmabhoomi temple in Ayodhya, praised the goal of the Bharat Jodo Yatra and wished him luck.

The VHP, with whom Satyendra Das has a troubled history, expressed sadness for the action, saying the priest ought to have taken into account the Congress’s past with regard to Lord Ram.

Rahul Gandhi’s Bharat Jodo Yatra followed the same path Tuesday to reiterate his analogy that the burning down of a public school, which was a target of the Northeast Delhi riots in 2020, represented “the annihilation of values such as brotherhood, unity, and love in the country.”

The yatra resumed for its final leg in Delhi before moving into Uttar Pradesh, where it will next travel to Haryana and Punjab before coming to a close on January 30 in Kashmir.

He began at the Marghat Hanuman Mandir in Kashmere Gate, travelled through Northeast Delhi, and then entered Ghaziabad, from which it will continue on Wednesday.