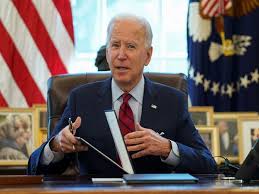 American President Joe Biden on Tuesday again signed a second series of orders to negate his predecessor Donald Trump’s immigration policies by exhibiting the powers of the White House and its limitations without support from Congress.

His orders on family separation, border security and legal immigration bring to nine the number of executive actions on immigration during his first two weeks in office. With proposed legislation to give legal status and a path to citizenship to all of the estimated 11 million people in the country who don’t have it, Biden has quickly taken aim at many of former President Donald Trump’s sweeping changes to deter immigration, both legal and illegal, and established a vision that is likely to far outlast his tenure if he’s able to muster enough support in a deeply divided Congress.
Biden invalidated some Trump actions and laid a foundation for more far-reaching revocations depending on the outcome of policy reviews over the next few months.

Before signing the orders Biden said, “Today I’m going to sign a few executive orders to strengthen the immigration system, building on the executive actions I took on day one to protect Dreamers and the Muslim ban and to better manage our borders. I’m not making new law, I’m just eliminating bad policy. What I’m doing is taking on the issues that 99 percent of them, that the president, the last president of the United States issued executive orders I thought were very counterproductive to our security, counterproductive to who we are as a country, particularly in the area of immigration”.

“This is about how America is safer, stronger, more prosperous when we have a fair, orderly and humane legal immigration system,” he further said.