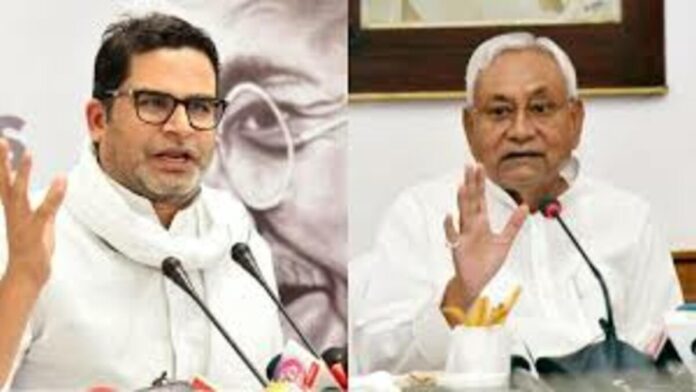 Prashant Kishor, a political strategist-turned-activist, launched a scathing attack on Bihar Chief Minister Nitish Kumar on Tuesday, alleging that the latter had recently asked him to “command” the Janata Dal (United).

Kishor made the claim in a rural area of West Champaran district, roughly 275 kilometers from Patna, while on a 3,500-kilometer “pada-yatra” that would cover every nook and cranny of the state.

“He came to see me in Delhi seeking assistance after failing to win the 2014 Lok Sabha elections. As the Mahagathbandhan’s nominee for chief minister, I helped him win the 2015 assembly elections. He has the audacity to impart “gyan” (knowledge) to me today, Kishor continued.

The 45-year-old former national vice-president of JD(U) appears to have taken to heart Kumar’s dismissive claim that Kishor “did not know A, B, and C” in a recent statement “about the politics of Bihar and the promised transformation of the state’s economy.

“The IPAC founder said, displaying outrage, “I am the son of a doctor, seeking to work in my home state after having established my mettle across the country.

“You must have all read in the media that Nitish Kumar had invited me to his home ten to fifteen days ago. He wanted me to be his party’s leader. I stated it couldn’t be done. I cannot back out of the commitment I made in exchange for any position, said Kishor, who also initiated the “Jan Suraaj” public awareness campaign.

When Kumar, the party’s leader at the time, admitted Kishor into the JD(U), he quickly promoted him to the position of national vice-president.

But less than a few years later, a disagreement with Kumar over the Citizenship (Amendment) Act and the National Register of Citizens resulted in his removal from the party.

JD(U) officials were preoccupied with celebrations and a Patna High Court ruling that put municipal elections in risk on the day when Kishor’s most recent remarks were made, so they delayed responding to them.

However, Kishor’s outbursts came only a day after Rajiv Ranjan Singh, aka Lalan, the national head of the JD(U), questioned Kishor’s finances.

By declaring, “those wishing to know from where I am obtaining the money should know that unlike them, I have not involved in ‘dalaali’ (brokerage),” Kishor further sufficiently expressed his annoyance.

“My counsel on how to win elections has always been sought for by politicians. My track record as a political strategist has received a lot of positive press. But I’ve never before asked anyone for a loan,” he remarked.

“But right now, I’m looking for donations. This is the contribution I’m making to the movement’s development, which includes paying for things like the tent we’ve set up here “In the video footage posted on social media accounts by “Jan Suraaj,” Kishor can be heard stating.