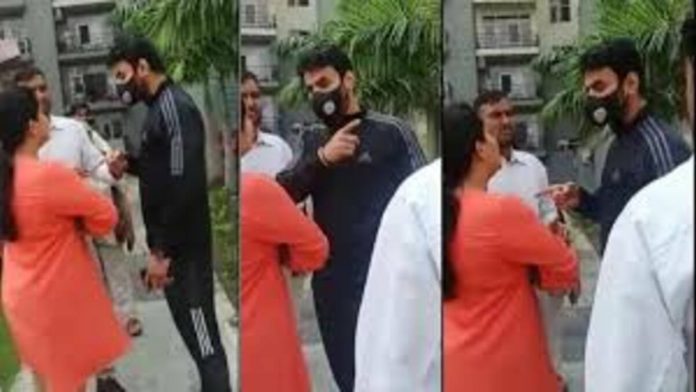 Days after a politician physically assaulted and shoved a woman in front of the camera at a Noida housing development, the politician’s supporters showed up there, yelled protest signs, and demanded the woman’s address. The BJP has declared that the accused, Shrikant Tyagi, is not affiliated with them despite the fact that he uploaded pictures of himself with prominent BJP figures and claimed to be a member of the BJP’s Kisan Morcha.

Residents of Grand Omaxe in Noida’s Sector 93B had earlier demonstrated in force against the police for their inaction, furious at the commotion caused by Mr. Tyagi’s supporters.

In a video recorded using a mobile device, the police are seen attempting to maintain control of the situation while standing between the locals and Mr. Tyagi’s followers who are yelling slogans.

Residents drew attention to the politician’s brazenness, who allegedly sent his followers and threatened the woman and residents late at night in the midst of the housing complex despite being captured on camera assaulting and abusing a woman.

Mahesh Sharma, a BJP leader and visibly furious Noida MP, told reporters that he had asked the police how the politician’s supporters, who are on the run, managed to go into the apartment building and threaten the inhabitants, even going so far as to inquire about the woman’s apartment.

“This is our government, and I’m embarrassed to admit it. Discover how these 15 men entered the housing complex “Speaking to reporters on the phone, Mr. Sharma stated.

48 hours after the initial incident was reported, Mr. Tyagi, who is charged by the police, is still at large. The police have also been instructed to detain him by the National Commission for Women.

Supporters of the politician have been detained by the police.

In the park section of the housing complex, Mr. Tyagi had planted palm trees, and the woman at Grand Omaxe had urged him to take them out. Since 2019, Mr. Tyagi had been embroiled in the conflict with the residents of the society. They charge him with invading the park and common area while threatening them.

After pictures of Mr. Tyagi with prominent party figures like JP Nadda and Swatantra Dev Singh appeared on social media, the BJP distanced itself from Mr. Tyagi.