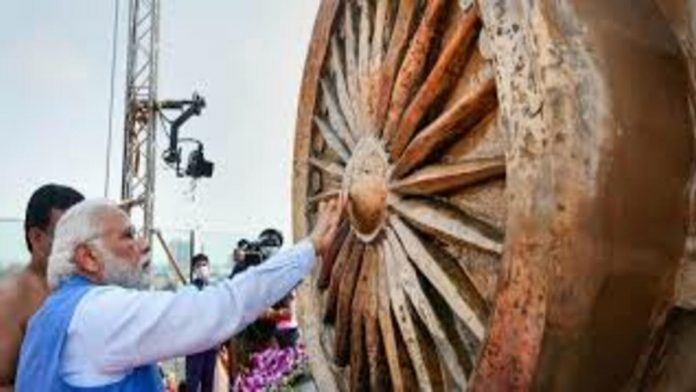 On Monday, Lok Sabha Speaker Om Birla and Union Housing Minister Hardeep Puri joined Prime Minister Narendra Modi in a special event to reveal the national symbol that has been installed atop the new Parliament building.

Opposition parties, however, accused the Prime Minister of making it a personal event and questioned the constitutionality of the PM revealing the insignia atop the Parliament building following the ceremony. The BJP responded by claiming that the opposition parties’ claims are politically motivated.

The metal sculpture was created by artists Sunil Deore and Lakshman Vyas in Aurangabad, Jaipur, and Delhi. The Ashoka Emblem took the place of the former design, which included a spire on top of the structure, in 2020.

The PMO released a statement saying, “He also talked with the Shramjeevis involved in the work of the new Parliament.”

Before the Winter Parliament session, construction on the new Parliament, a ground plus two-story triangular structure, is anticipated to be finished. The Ashoka emblem was chosen to replace the spire that was originally supposed to crown the new Parliament.

The main entrance has been dubbed Constitution Hall since it will likely house a public exposition of the Constitution. The central foyer will also have a library.

According to a PMO statement, the concept sketch and casting procedure for the national anthem on the roof of the new Parliament building went through eight different stages of preparation, from clay modeling and computer graphics through bronze casting and polishing.

“Honorable Prime Minister Narendra Modi ji dedicated the new national flag that was placed atop the Parliament building. While the hopes of a new India will be realized by the new Parliament House, this national icon will continue to motivate us to preserve India’s unity, integrity, and sovereignty, according to a tweet from Lok Sabha Speaker Om Birla.

The Prime Minister received criticism from the opposition parties for revealing the national anthem cast atop the new Parliament building, which they described as a “obvious violation of the Constitution.”

“The Indian people, not any one guy, own the parliament and the national anthem. Imagine if the major party leaders had taken the oath of allegiance to the Constitution at the inauguration today. Gaurav Gogoi, the deputy leader of the Congress in the Lok Sabha, tweeted, “But why ruin the photo for our Shahenshah?

The Executive (government), the Legislature (Parliament and state assemblies), and the Judiciary are clearly distinguished under the Constitution. The President convenes the legislature. The Executive is led by the Prime Minister. The Legislature has a separate function to play that includes, among other things, passing laws and holding the Executive responsible. The head of the Executive is undermining this constitutional division of powers between the three wings, according to a statement from the CPM.

Anil Baluni, the chief spokesperson for the BJP and a member of the Rajya Sabha, responded to the opposition’s onslaught by claiming that the accusations were politically driven.

“Opposition parties casting doubt on the ceremony’s unveiling should be aware of the administrative procedure. The urban development department is responsible for all aspect of the project, including the design, funding, and construction management. The prime minister even laid the foundation, according to Baluni.

He stated that the building would be turned over to the parliament administration once the construction was finished. The opposition parties’ latest round of baseless accusations, which appear to have a political motivation, is regrettable, according to Baluni.

The religious ritual that was planned for the event was also criticized by the CPM. D Raja, general secretary of the CPI, questioned “how a personal function” was organized in Parliament, saying it belonged to everyone. Furthermore, Parliament is impartial, therefore he questioned, “Why bring religious functions into it?”