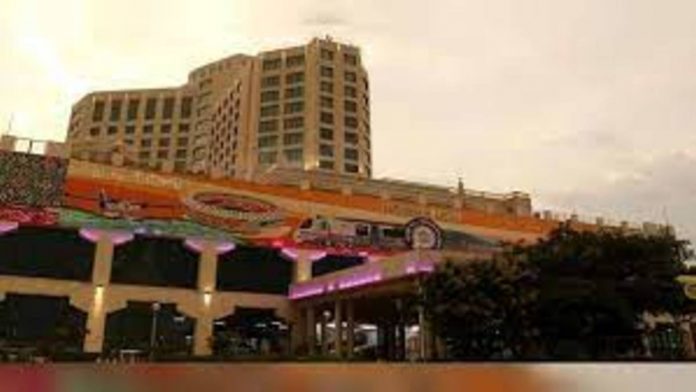 On Friday, Prime Minister Narendra Modi will virtually inaugurate projects in Gujarat worth over Rs 1,100 crore. Three new attractions in a cutting-edge technology city, a five-star hotel atop a railway station, and new trains are among the initiatives.

The five-star hotel is part of the refurbished Gandhinagar railway station, and Ahmedabad’s science city has been enlarged to include an aquatic gallery, a robotic exhibition, and a natural park.

5 Star Hotel atop a Railway Station
The Gandhinagar Railway and Urban Development Corporation (GARUD) and the Ministry of Railways have collaborated to build a five-star luxury hotel above the Gandhinagar railway station.

The luxurious hotel is stretched out across 7,400 square metres and offers 318 rooms. It came at a cost of Rs 790 crore to construct.

• The hotel, which stands 250 feet tall, was built as a special purpose vehicle (SPV) by the Gujarat government and the Ministry of Railways.
• The hotel will welcome national and international guests attending seminars and conferences at Mahatma Mandir, a convention centre located directly across the street from the high-end property, according to project officials.
• Green building features have been added to the railway station.
• It has been designed to be accessible to those with disabilities.
• In January 2017, the Gandhinagar train station was redeveloped, and construction on the five-star hotel began.
• The new-look Gandhinagar railway station, according to officials, is the country’s first renovated station with amenities comparable to airports.
• It connects platforms via two escalators, three elevators, and two subterranean pedestrian subways.
• The new railway station has set aside 7,600 square metres for potential commercial development, including multiplexes, shopping spaces, and food courts, all of which can be operated under the PPP model.
• A 40-seat centralised AC waiting lounge and an art gallery with LED wall display lounge are also available at the station.

A senior Railway official in Ahmedabad, Sumit Awasthi, remarked, “The Mahatma Mandir Convention Centre in Gandhinagar, is becoming the venue of choice for organising national and international events such as exhibitions, conferences, etc. There was a lack of proper connectivity and accommodation. As a result, Gandhinagar railway station has been redeveloped incorporating a 318-room swanky hotel within.”

“I have always wanted our railway stations to be of top quality, where apart from travels, there is a boost to commerce, hospitality and more. One such effort has been made in Gandhinagar. The upgraded station will be inaugurated tomorrow,” in a tweet, the prime minister stated.

An aquatic gallery, a robotic exhibition, and a nature park are among the attractions.

The aquatic gallery in Science City was developed at a cost of Rs 260 crore. With 68 enormous tanks displaying marine life from all around the world, it is India’s largest aquarium. This includes, among other things, reef sharks, alligator gar, Koi, and black pacu fish.

According to an official, the aquarium houses roughly 11,600 fish and marine animals from 188 different kinds.

The robotic gallery, which cost Rs 127 crore and covers 11,000 square metres, is another highlight.

It houses almost 200 robots of 79 different varieties, including humanoid robots with human-like bodies and machines that can communicate with humans.

There are numerous lovely elements in the park, including a fog garden, chess garden, selfie points, Sculpture Park, and an open labyrinth (maze). It is a fun labyrinth created for kids.

PM Modi wrote in a series of tweets about the new attractions at the research city, “Gujarat Science City is a place that I am very passionate about. When I served as CM, I had the opportunity to work towards developing it into a vibrant hub for encouraging science and innovation.”

“Tomorrow, the Aquatics and Robotics Galleries and Nature Park would be inaugurated. You would love visiting the Nature Park. It houses a Mist Garden, Chess Garden, Selfie Points, Sculpture Park and an outdoor maze. I specially call upon parents to take their children here.”

PM to Flag off Several Railway Projects
Prime Minister Narendra Modi will mark off a number of railway projects for Gujarat on Friday, in addition to the refurbished Gandhinagar railway station, the five-star hotel, and new attractions at Science City.

These projects include:
• Gandhinagar and Varanasi (Modi’s Lok Sabha seat) have a new weekly superfast train.
• Gandhinagar and Varetha in Mahesana district are connected by a Mainline Electric Multiple Unit train service.
• The newly electrified Mehsana-Varetha wide gauge rail route is 54 kilometres long. PM Modi’s hometown of Vadnagar is on this line.
• A 266 km stretch between Surendranagar and Pipavav station.

PM to Inaugurate Vadnagar Railway Station’s ‘New-Look Building’
Prime Minister Narendra Modi is expected to open a ‘new-look building’ at the Vadnagar railway station, according to officials. At a cost of Rs 8.5 crore, the structure was renovated and given a heritage aspect.

“The Vadnagar railway station, which is part of the Vadnagar-Modhera-Patan heritage circuit, has been redesigned by Indian Tourism, giving it a heritage look with aesthetic stone carvings,” in a statement, the Ministry of Railways said.

PM Modi said in his speeches in the run-up to the 2014 Lok Sabha election that he used to sell tea at the Vadnagar railway station as a boy.

According to information provided by the health department, Delhi recorded eight coronavirus-related deaths on Wednesday, the most in almost 180 days, and 2,146 new...
Read more
- Advertisement -