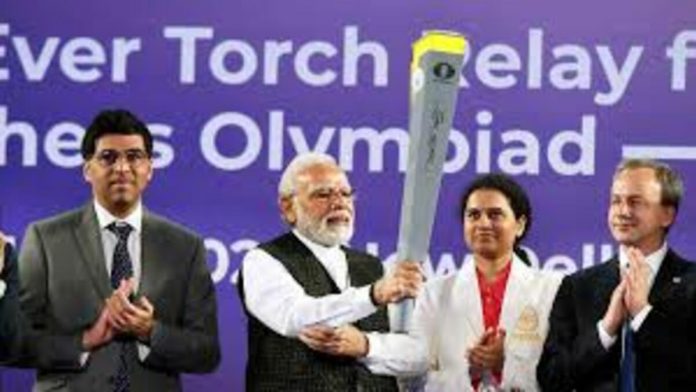 The first ever torch relay for the Chess Olympiad was launched off by Prime Minister Narendra Modi on Sunday, ahead of the 44th edition of the event.

The olympiad will be held in Mahabalipuram from July 28 to August 10.

For the first time, the International Chess Federation (FIDE) has instituted the torch relay, which is an Olympic tradition but has never been done before for the Chess Olympiad.

FIDE President Arkady Dvorkovich presented the torch to Modi, who passed it on to Viswanathan Anand, a five-time world champion.

Over the course of 40 days, the torch will travel to 75 cities until reaching in Mahabalipuram, near Chennai. Chess grandmasters from across the state will receive the torch at each venue.

“The first-ever torch relay of the Chess Olympiad is starting from India, and it is also the first time India is hosting the great event,” said Prime Minister Narendra Modi, who made a ceremonial move on the chess board against women Grandmaster Koneru Humpy.

“We are happy that the sport has grown from its humble beginnings to become a global phenomenon.” We are ecstatic to see chess return to its roots and celebrate its triumph through the Chess Olympiad.”

“The torch relay will begin in India, according to FIDE.” It is not only an honor for India, but also an honor for chess,” the PM continued, noting that chess is no longer only a game, but has evolved into an instructional tool.