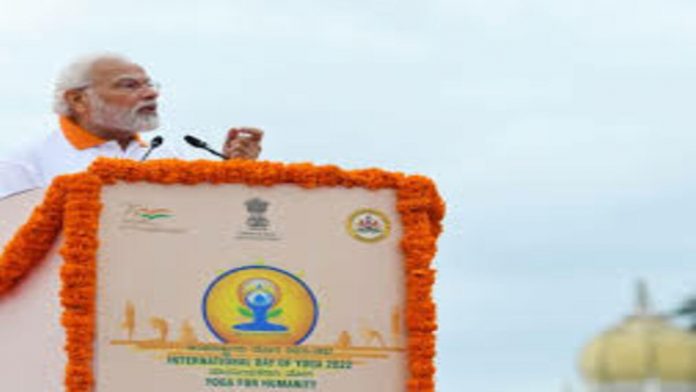 As he took part in the ninth International Day of Yoga (IDY) celebrations in Mysuru, Karnataka, Prime Minister Narendra Modi remarked that yoga has become a global festival because of widespread acceptance of the ancient Indian practice. “The embrace of the amrit spirit of India which gave vitality to India’s freedom movement,” Prime Minister Modi remarked before the 45-minute yoga performance. That is why 75 landmark spots around the country are hosting mass yoga demonstrations.”

“Yoga is India’s gift to humanity,” President Ram Nath Kovind said, greeting people on the occasion of International Yoga Day. “Yoga is a holistic approach to health and well-being, harmonizing mind, body, and spirit.” At the Rashtrapati Bhavan, the president took part in a Yoga Day demonstration. He also encouraged everyone to incorporate Yoga into their daily routine and reap the advantages.

The theme of this year’s Yoga Day celebrations is ‘Yoga for Humanity,’ and about 25 crore people are expected to participate in various activities around the world, practising yoga in unison in the name of better health and wellness for everyone. A flagship program has also been organized in collaboration with the Ministry of External Affairs for a global Yoga Protocol on the day of the sun’s movement.

Anurag Thakur, a Union Minister, stated on Tuesday that it was Prime Minister Narendra Modi who emphasized the importance of yoga before the United Nations General Assembly and urged the world to adopt it.

“All countries throughout the world have adopted yoga as a result of his call, and every year on June 21st, they mark International Yoga Day. This is a significant accomplishment for India “During a yoga practice session at Katoch Palace in Sujanpur, the minister for information and broadcasting said.

People can be seen doing yoga at corporate offices, shopping malls, and airports, according to Thakur, who said that the ‘Azadi Ka Amrit Mahotsav’ is being held in 75 famous historical heritage sites across the country with the theme “Yoga for Humanity.”

Chief Minister Arvind Kejriwal tweeted, “On the occasion of International Yoga Day, I also joined “Delhi ki Yogshaala” to practice yoga with the people of Delhi.”

On the occasion of International Yoga Day on Tuesday, Delhi Chief Minister Arvind Kejriwal did yoga asanas with hundreds of people at Thyagaraj stadium.

He urged individuals to make a daily commitment to practicing Yoga and Pranayam.

At the stadium, Kejriwal and his deputy Manish Sisodia joined members of ‘Dilli Ki Yogashala’ for a Yoga practice.

In a series of tweets, he claimed that the Delhi government had set up free Yoga courses and advised people to participate in the exercises for the sake of living a healthy life.

The power of yoga is the power of unity for a healthier and prosperous future for all, and it is here to stay, according to Abdulla Shahid, President of the United Nations General Assembly’s 76th Session, who emphasized that the practice provides a holistic approach at a time when the world is recovering from the COVID-19 pandemic, which triggered a wave of anxiety and depression.

On Monday, Shahid spoke at a special memorial ceremony hosted by India’s Permanent Mission to the United Nations.

The 8th International Yoga Day on Tuesday, with the theme “Yoga for Humanity,” could not have come at a better moment, he said, since the COVID-19 pandemic has upended lives and livelihoods, causing a flood of worry and melancholy.

Kashmir (Jammu and Kashmir) Lieutenant Governor Manoj Sinha led the International Yoga Day celebrations in the union territory on Tuesday, doing yoga asanas on the banks of the Dal Lake and encouraging everyone to adopt the ancient practice.

The event was attended by Union Minister of State for Panchayati Raj Kapil Patil, Chief Secretary A K Mehta, and Srinagar Municipal Corporation Mayor Junaid Mattu, among others.

“On this #InternationalDayofYoga, I wish you all the best. At Dal Lake in Srinagar, I participated in #YogaDay2022 with Hon’ble Union Minister of State Shri @KapilPatil_ and hundreds of others. I urged everyone to adopt Yoga as a way of life in order to achieve a holistic approach to health and well-being “Sinha sent out a tweet.

On the occasion of International Yoga Day, Gujarat Chief Minister Bhupendra Patel and Union Minister of State for Finance Dr Bhagwat Karad joined a gathering of about 7,500 people in practising yoga at the Sabarmati Riverfront in Ahmedabad on Tuesday morning.

‘Since the coronavirus outbreak, more and more people have realized the necessity of a healthy lifestyle based on yoga and ‘pranayam,’ Patel stated to the audience.

The CM also stated that qualified yoga teachers would be made available with the support of the Gujarat State Yog Board, which was established by the state government two years ago.

‘Today, on the occasion of International Yoga Day, I did yoga at a state level event held in the Sabarmati Riverfront in Ahmedabad,’ Patel tweeted.