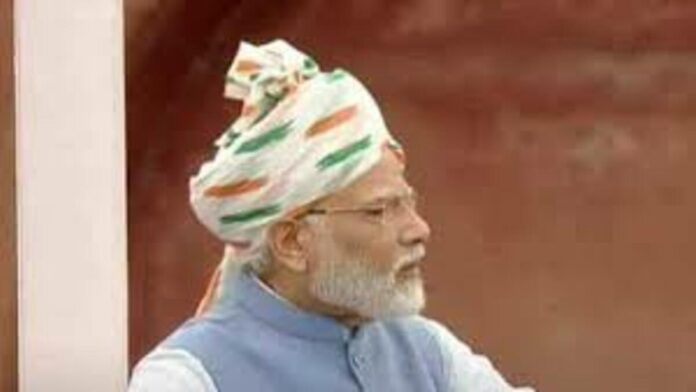 Staying aware of custom with his different fashion decisions during his standard location to the country on 75th Independence Day from the Red Fort in Delhi, PM Narendra Modi was today spotted wearing a white turban with stripes of the tri-colour.

Representing for continuous 9th time at the event from the famous legacy building, he was clad in a white kurta-pajama and a navy blue waistcoat, with the turban plainly sticking out.

Prime Minister Narendra Modi is known for his string of turbans he has worn on Independence Day and Republic Day since he came to power in 2014. Last year, on this day he had worn a saffron turban with red patterns and long pink trail.

Leading the 75th Independence Day celebrations, PM Modi started with unfurling the national flag and then addressed the nation from the ramparts of the iconic Red Fort.

The tri-colour has highlighted vigorously in this year’s celebrations with the nationwide campaign “Har Ghar Tiranga” being promoted by the government. Many “Tiranga Yatras” have also been carried out the throughout the country by BJP members.

This 75th Independence Day is being marked by the mega programme the “Azadi Ka Amrit Mahotsav”, which begin in March 2021.