Perpetrators’ Houses Under Demolition Amid Heavy Protests In Prayagraj 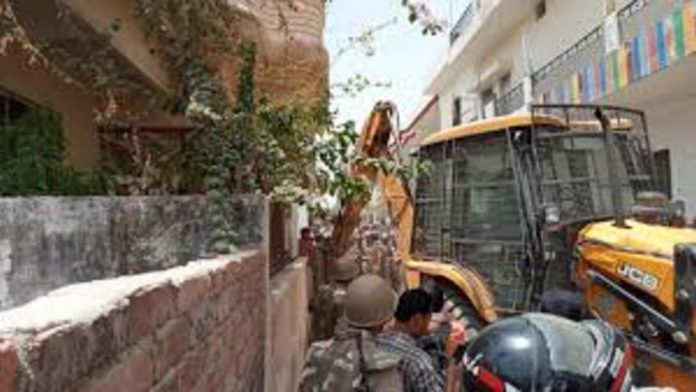 The Uttar Pradesh Police has claimed that Javed Mohammed, the main accused in Prayagraj violence possessed objectionable posters and illegal weapons. A raid was conducted at his home where he has supposed to kept them.

The raid took place before the demolition exercise on Sunday, said the police.

“We have found a 12 bore illegal pistol and a 315 bore pistol and cartridges and some documents that show objectionable comments against the honourable court,” said the Senior Superintendent of Police Prayagraj, Ajay Kumar.

The leader of Welfare Party of India Javed Mohammed’s house was demolished in yesterday afternoon.

A notice was stuck outside his house, calling it an illegal construction before the demolition exercise. The notice even mentioned that Javed had failed to reply to the orders of demolition given to him in May.

The other places where the demolition activities were carried out include Saharanpur and Kanpur, where violence took place on June 3.

Meanwhile, the District Magistrate of Prayagraj, Sanjay Khatri said that demolition was just a “normal process”.

“The administration acts regularly against illegal constructions…  There is a set procedure including giving a notice and in this matter of Mohd Javed too we followed the procedure,” he said.

On the other side, a team of lawyers moved to Allahabad High Court calling the demolition of Javed Mohammed’s house illegal.

They said that the house was in the name of Javed’s wife and they did not receive any notice of illegal construction prior.

A senior state police official Prashant Kumar said that after the demolition activities amid Friday’s protests, the properties owned by the accused will come under the state under a 2020 law. Three tribunals in Prayagraj, Meerut and Lucknow have also been opened to look into the matter.

Muhammad made by BJP now-sacked leader Nupur Sharma. Since, the hate speech delivered by the BJP leader around 15 Islamic countries have been on continue criticism. However, in its response the Indian government said the comments were only the views of few “fringe elements”.