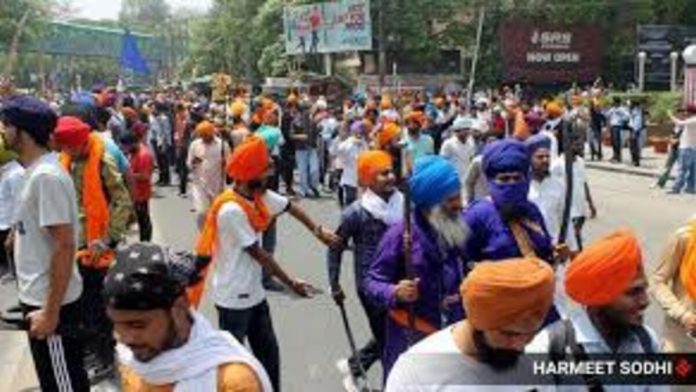 The altercation between two groups in Patiala on Friday over a “anti-Khalistan march” has once again thrown into prominence several Shiv Sena sections in Punjab.

Harish Singla, the leader of an entity calling itself Shiv Sena (Bal Thakeray), is at the centre of the present controversy, having called for a march in Patiala against “Khalistanis and outlawed organisation Sikh for Justice lawyer Gurpatwant Singh Pannu.”

Yograj Sharma, the party’s president, has alleged that Singla was dismissed from the party on April 20, 2022, after he called for the march, and that the SSP Patiala was also informed.

“We don’t want any problems with Sikhs, and we have no plans to inflame the situation up Punjab.” Harish Singla had a personal interest in today’s call, and our body has nothing to do with it,” Sharma added, claiming that his group was the first of numerous Sena factions to form in Punjab.

Given the state’s history of Sena politics, most Hindu right-wing bodies in Punjab have named themselves after the Shiv Sena. This makes it easier for these groups to signal what they stand for.

Despite Sharma’s claim that his organisation was founded in 1966, the state saw a proliferation of Sena factions in the run-up to Operation Blue Star in 1984. Pandit Kishore Chand, a retired Punjab police officer, founded the Hindu Shiv Sena. Pawan Sharma’s Hindu Suraksha Samiti was also known as the Shiv Sena Hindustan.

Jarnail Singh Bhindranwale would frequently reference the Sena groups in his talks, accusing governments and police of “sheltering” their leaders and “enabling” them to “verbally and physically” target Sikhs. Various Sikh organisations continue to level such accusations against them.

The Shiv Sena Samajwadi, Shiv Sena Rashtarwadi, Shiv Sena Hindu Bhayia, and Shiv Sena Akhand Bharat are among the more than 15 Sena factions that have divided in Punjab since its inception.

Even as they make news for their fights with various Sikh and Dalit entities, most Sena groups claim to be champions of the Hindu community’s rights in the Sikh-dominated Punjab.

In the 1980s and 1990s, militants in the state assassinated a number of Sena leaders. Several Sena factions become active at the anniversary of Operation Blue Star, even as they frequently target imprisoned Sikh militants, causing tension and clashes with various Sikh bodies.

In 2012, during such clashes over the death sentence of Sikh prisoner Balwant Singh Rajoana, a Sikh youth, Jaspal Singh, was murdered in gunfire.

In April 2018, some Sena factions clashed with Dalit entities in Phagwara, resulting in the death of a Dalit youth. Sena leaders have recently begun to target the Muslim community. They’ve also turned to cow vigilantism and even attacked the state’s soap business.

The Sukhbir Singh Badal-led Shiromani Akali Dal (SAD) had joined hands with the Shiv Sena Hindustan after parting up with the BJP last year, despite the latter having little electoral base.

According to Yograj Sharma, the Sena groups in Punjab are being run for vested interests. “Many Shiv Sena factions are tarnishing the organisation. Criminal politicians will sometimes form a faction and then exploit it to extort money and shield criminals. For such leaders, police protection is an added perk. “We want the Punjab government to deny them security,” he stated.

“Hindu fringe parties like Shiv Sena units and Hindu Suriaka Samiti are in fact state renegades who have been employed every now and then to kindle communal flames,” Dal Khalsa leader Kanwar Pal Singh claimed. Their leaders are all seasoned puppets of central agencies who have been trained to sow discord and trouble in border areas such as Punjab.”

Because of the history of terrorist attacks against Sena faction leaders, the Punjab Police has consistently provided security to them.

However, there have been instances where authorities have arrested some of them for allegedly plotting an assault on themselves in order to obtain security. Narinder Bhardwaj, the Shiv Sena Hindustan labour wing chairman, was arrested in March 2020 for “falsely reporting” an attack on himself in order to obtain security. Similarly, the Ludhiana police arrested Shiv Sena (Punjab) leader Mahant Kashmir Giri in April 2021 for reportedly planning an attack on himself.