Pakistan In Dire Need Of Help Amid Heavy Floods, Toll Increases To 1,136 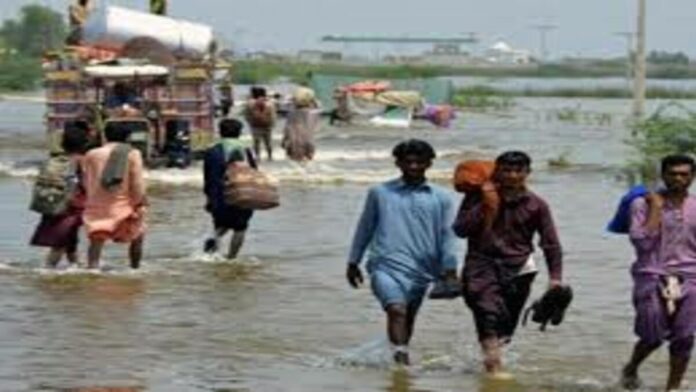 Millions of Pakistanis have been severely impacted by the catastrophic floods, which are the worst in ten years, and are in urgent need of assistance as the death toll has risen to 1,136. Since the country’s death toll surpassed 1,000 on Monday, Pakistan has been devastated by the abnormally powerful monsoon rains.

According to Climate Change Minister Sherry Rehman, a third of Pakistan is under water as a result of flooding brought on by unprecedented monsoon rains, according to news agency AFP. The scenario was described by the minister as the “monster monsoon of the decade.”

According to the most recent statistics released by the Government Disaster Management Authority, the principal national agency charged with dealing with disasters, at least 1,136 people have died as a result of floods and 1,634 have been injured. Although thousands of residents of the highlands have been told to leave, officials are still having trouble rescuing those who are stuck despite the assistance of helicopters.

One in seven Pakistanis, or at least 33 million people, have been impacted by the flooding, according to officials. Unprecedented flash floods resulting from unprecedented monsoon rainfall have destroyed bridges, infrastructure, crops, and roadways.

The officials warned that the death toll from the floods might be considerably higher. Since swelling waters wrecked roads and bridges, thousands of villages in the Khyber Pakhtunkhwa region are still cut off from the rest of the nation.

Thousands of villages in Khyber Pakhtunkhwa province remain blocked off from the rest of the country because swollen rivers wrecked roads and bridges, according to officials, who warned that the final death toll from the flooding may be far higher.

Shehbaz Sharif, the prime minister of Pakistan, has made a global appeal to raise money for the relief and rehabilitation of those affected by the country’s recent floods. The nation has been urged by the Sharif-led administration, which is struggling to pay its bills and needs additional funding to provide aid to the flood victims.

On Tuesday, a formal appeal for USD 160 million to support Pakistan’s humanitarian aid would be made by the UN and Islamabad.

The UN Secretary-spokesperson, General’s Stephane Dujarric, stated during a press conference on Monday that “the situation is projected to worsen with further continuing rainfall.”

He stated, “We are arranging a flash appeal of $160 million with the (Pakistani) government for emergency assistance measures. The request will formally launch on Tuesday. A further USD 3 million has been made available by the UN emergency response fund.

The International Monetary Fund (IMF) on Monday approved the resumption of its Extended Fund Facility (EFF) programme, allowing Pakistan to receive the 7th and 8th tranches of USD 1.17 billion, which will help the cash-strapped nation.

The decision, which would provide Pakistan with the urgently needed USD 1.17 billion, was made during the IMF executive board meeting in Washington.

The International Monetary Fund’s Board has given its approval for the restart of Pakistan’s EFF programme, according to Finance Minister Miftah Ismail.

“The 7th and 8th tranches, totaling USD 1.17 billion, should soon be arriving. I want to express my gratitude to Prime Minister @CMShehbaz for making so many difficult choices that prevented Pakistan from going bankrupt. I commend the country “Ismail, who had gone above and above to satisfy the donor’s stringent requirements, tweeted.

According to Planning Minister Ahsan Iqbal, heavy rains and flooding that covered a large portion of the country have caused economic losses of over USD 10 billion.

Planning Minister Ahsan Iqbal told Reuters, “A very early, preliminary assessment is that it is large, it is higher than $10bn (£8.5bn).”

He also noted that rice, rice fields, and vegetable, fruit, and cotton fields all suffered significant damage. Nearly half of the nation’s cotton crop washed away. He added that these were preliminary evaluations and could change if field research was done, according to The News.

The floods, which have flooded vast tracts of farmland and stored crops, have been particularly devastating to Pakistan’s southern, southwestern, and northern regions.

The worst-affected provinces are Sindh and Balochistan, where huge farmlands have been reduced to a landscape of water. Khyber Pakhtunkhwa’s hilly areas have also been severely affected.

When a boat transporting 30 flood victims crashed in Sindh’s Sehwan on Monday, at least 11 people, including women and a kid, drowned, while several others are still missing. When the flood victims were moving from submerged villages to a safer area, the tragedy took place.

Seven individuals were saved, according to a senior police official, by Sindh police officers and members of the Pakistan Navy, while searches are still being conducted for the other victims who have vanished.

The world has responded to Pakistan’s need for assistance with humanitarian aid and messages of support from a number of nations. The United Nations, the United Kingdom, the UAE, and other nations have donated to a catastrophe appeal.

On Monday, Prime Minister Narendra Modi expressed his sadness over the tragedy brought on by the floods in Pakistan and expressed hope for a speedy return to normalcy.

“Sad to witness the destruction brought on by the floods in Pakistan. We offer our sincere sympathies to the relatives of the deceased, the injured, and everyone else impacted by this natural disaster, and we pray for a speedy return to normalcy “Added Modi in a tweet.

Arif Alvi in Pakistan received a sympathy message from Chinese President Xi Jinping as well. According to Xi, China promised to keep giving Pakistan the much-needed assistance and support it needs to deal with natural disasters.

Queen Elizabeth of Britain expressed her sadness over the loss of life and property in Pakistan as a result of the floods and stated that the UK stands in solidarity with the nation.

“My prayers are with the victims and everyone contributing to the valiant relief effort. The United Kingdom continues to stand behind Pakistan’s people in their hour of need and is sending assistance “Boris Johnson, the prime minister of Britain, tweeted.

In cooperation with the Provincial Disaster Management Authority, the non-governmental organisation Qatar Charity has provided relief to the disadvantaged residents of Balochistan and the Afghan refugees who were devastated by the floods.

Harjit Sajjan, Canada’s Minister of International Development, announced that the Canadian government had given USD 20,000 to the International Federation of Red Cross and Red Crescent Societies for flood relief efforts in Pakistan.

The Central Emergency Relief Fund of the United Nations, which has allotted USD 3 million for flood response, also accepts donations from Canada.