Oxygen leakage leads to 22 deaths at Nashik hospital in Maharashtra

The patients lost their lives due to failure of oxygen supply after leakage at the storage plant. 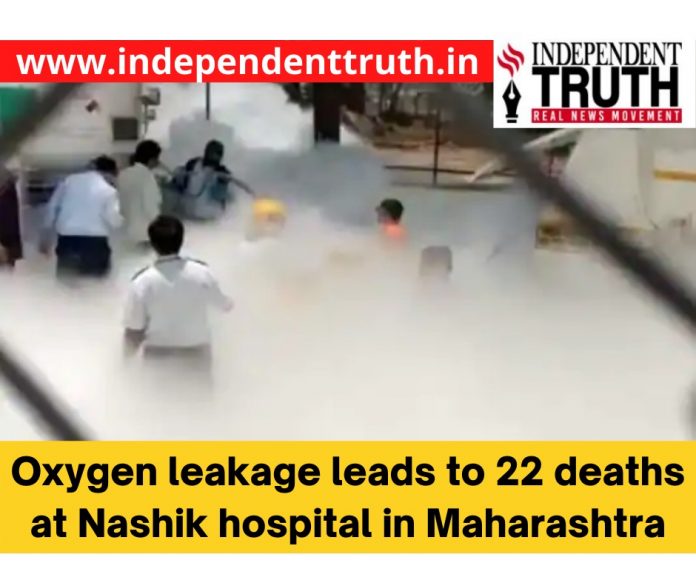 At least 22 patients at Nashik’s Zakir Hussain municipal hospital have died on Wednesday due to disruption in supply of liquid medical oxygen.

The supply was interrupted because after a leakage in a oxygen storage plant. All patients were on oxygen support, which they could not get after the leakage.

Prime Minister Narendra Modi, former Congress President Rahul Gandhi and many Union ministers have expressed their grief over the incident on Wednesday.

Terming the the incident “heart-wrenching” prime minister Modi tweeted, “The tragedy at a hospital in Nashik because of oxygen tank leakage is heart-wrenching. Anguished by the loss of lives due to it. Condolences to the bereaved families in this sad hour”.

“The news of patients’ death at Nashik’s Zakhir Hussain Hospital is extremely tragic. My heartfelt condolences to the aggrieved families. I appeal to (the) state government and party workers to provide all possible assistance,” tweeted the Congress leader.

Meanwhile, the former Chief Minister of Maharashtra and a leader from Opposition Devendra Fadnavis has sought a detailed inquiry in the matter.

“What happened in Nashik is terrible. I demand that other patients be helped and shifted if needed. We demand a detailed inquiry,” said Fadnavis.

On the other hand the state Health Minister Rajesh Tope assured that the state government will closely investigate the matter. “We will issue a statement later after the investigation is over,” said Tope.

The Union Defence Minister Rajnath Singh also expressed his grief by tweeting, “Devastating news from Nashik where precious lives have been lost due to leakage in Oxygen supply at a hospital. I am deeply pained by the loss of lives due to this tragic incident. In this hour of grief, my thoughts are with the bereaved families.”

Being anguished at the Nashik tragedy the Union Road and Transport Minister Nitin Gadkari, who is also an MP from the state expressed his grief by tweeting, “Anguished to hear about the loss of lives due to oxygen leakage from a tanker in Nashik. I express my deepest condolences to the families”.

Researchers have said India may see third Covid-19 wave may hit this month and peak with less than 100,000 in normal scenario and maximum...
Read more
In Focus

Indian women's hockey team has registered its one of the greatest wins in history by beginning Monday with a shocking 1-0 success throughout three-time...
Read more
In Focus

Sindhu was hoping to arrive at a second straight Olympic final however ended up tumbling to a determined Tai Tzu Ying of Taiwan in...
Read more
- Advertisement -