Over arrests on Posters criticising PM Modi, Rahul Gandhi says “arrest me too” 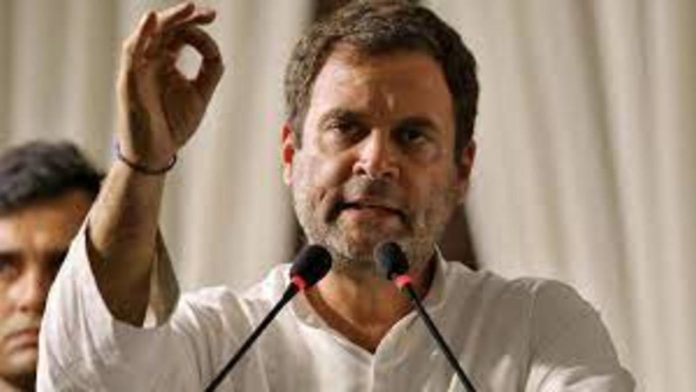 After revelation by the Delhi Police that there was an involvement of AAP leaders in the posters criticising Prime Minister Narendra Modi over vaccine supplies, the Congress leader Rahul Gandhi on Sunday tweeted “arrest me too”.

Posters stating “Modi ji why did you send vaccines meant for our children abroad” are lining widely over social media. Congress leaders Rahul Gandhi and Priyanka Gandhi Vadra have made it their Twitter profile and the party spokesperson has said that the PM is bound to be asked such questions as he is one who has taken every single decision since the pandemic has started.

After announcing that AAP was involved in putting up of those posters the Delhi Police were harassing the AAP workers, AAP leader Durgesh Pathak told media. “Today, when the people of India are asking why Modi ji sent vaccines abroad… Modi ji’s Delhi Police is registering FIRs and sending our workers to jail,” he said.

Delhi Police, in the mean time, said its investigation showed the role of AAP functionaries who coordinated and financed a “defacement campaign” infringing upon the lockdown rules. Numerous AAP volunteers were straightforwardly associated with setting up the posters and furthermore paid individuals to disregard the lockdown standards and fix the photos, the police asserted.

The investigation showed that enormous amounts of cash were spent to open printing machines, the police said. In Mangolpuri, the police professed to have acquired video footage showing a few men sticking posters at 4am.

“The accused persons disclosed during interrogation that Arvind Gautam of Sultanpur Majra, New Delhi, who is an AAP worker, had sent an order on WhatsApp to one Rahul regarding the subject matter of printing and Rs 9,000 for printing and affixing these poster and hoardings. Rahul made a graphic image for printing and placed the order with one Rajesh via email,” said Chinmoy Biswal, the police spokesperson.

In south district, two suspects, recognized as AAP workers Santosh and Mayank, were spotted on CCTV and held, the police said. They added that one Sanjay Chaudhary (a councilor applicant of AAP) had entrusted them to append these posters.

The content of the posters was sent to Mayank by Sanjay Chaudhary through WhatsApp. Mayank got 20 posters printed for Rs 4,000. In west district, four individuals were held and the role of Prashant Kumar, an AAP specialist, alongside Rakesh Joshi, likewise a functioning party part, was discovered, the police said.

In Dwarka region, two individuals had put posters over telephone poles. One of them, Suhail was an AAP member and a close aid to AAP municipal councillor Praveen Kumar, the police said. In Timarpur, Tarkeshwar Jaiswal were caught while sticking banners. He said one Bharat had requested that he do as such. Bharat said he worked for AAP and was head of the neighborhood “Jatav samaj”, the police asserted.

Police has arrested four people from east Delhi and has seized a large number of posters. The police has estimated that a huge amount has been paid for printing of these posters.

Congress’ online dissent included party functionaries from the central command to state units, as they looked to enhance shock over the captures. Congress logically inquired as to whether he would make a law that would make it necessary to adulate him, even while incinerating the dead.

“The National Disaster Management Act has been imposed in Delhi but Congress supporters, incited by their mindless leaders, resorted to break the law against which Delhi Police took the action,” said Anil Baluni, BJP spokesperson.

He also said that the Congress leaders must understand it first that it is yet to be decided that when the children will be vaccinated and is subject to be approved by experts. “Congress leaders are consistently spreading lies about Covid management. Their behaviour is most unfortunate and irresponsible. Instead of acting as a responsible opposition, they are busy doing politics,” he added.