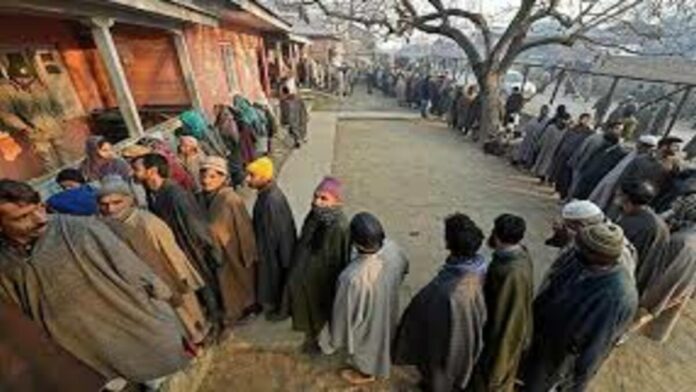 Around 25 lakh new voters are likely to be registered for the next elections in Jammu and Kashmir. Now non-locals can also register for voting in the region fod the first time.

Former Chief Ministers Omar Abdullah and Mehbooba Mufti have however condemned the decision calling it a “dangerous attempt” to affect elections.

There have been no elected government in the Union Territory for more than four years. Fresh elections are likely to be held next year.

After the Centre revoked Article 370 in 2019, that changed the constitution and allowed the non-Kashmiris to vote and own land there, it is for the first time a revision in electoral rolls will allow non-locals to register to vote in Jammu and Kashmir.

Over 20 lakh new voters are likely to be registered ahead of the elections, said the Jammu and Kashmir Chief Electoral Officer Hirdesh Kumar. These new registrations will add up to more than one-third of the existing vote bank of 76 lakh voters.

“After abrogation of 370, those who couldn’t vote earlier can now register as voters. We are expecting an addition of (20-25 lakh) new voters in the final list,” said the Chief Electoral Officer.
He also said, just like all other states anyone working or living in the Union Territory can now vote there.

However, the political parties of Jammu and Kashmir have strongly objected the move.
Meanwhile, the National Conference leader Omar Abdullah has alleged that the decision was the result of BJ’s “insecurity” regarding backing in the region.

“Is the BJP so insecure about support from genuine voters of J&K that it needs to import temporary voters to win seats? None of these things will help the BJP when the people of J&K are given a chance to exercise their franchise,” said Mr Abdullah.

On the other hand, another former Chief Minietr Mehbooba Mufti also said that the BJP was trying to influence the elections. “Allowing non-locals to vote is obviously to influence election results. Real aim is to continue ruling J&K with an iron fist to disempower locals,” she said in a tweet.

Criticising the BJP’s policies in the UT, she referenced Palestine and Nazi Germany while talking to the media.

“Democracy is in danger. They are simply trying to bring in 25 lakh BJP voters through the backdoor,” she further said.