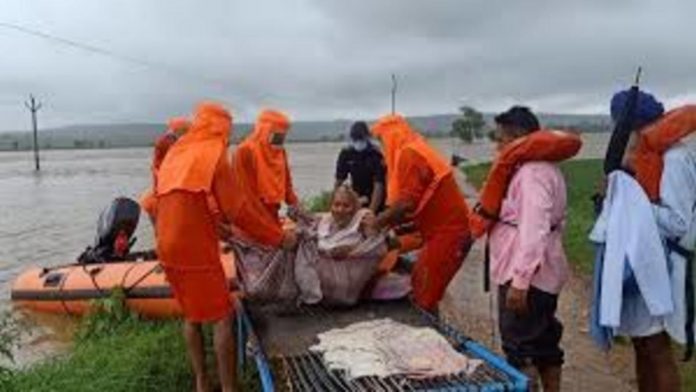 Following heavy rains on Tuesday, the Gwalior-Chambal region of Madhya Pradesh was submerged in floods, affecting as many as 1,171 villages. According to press reports citing officials familiar with the situation, the majority of these locations are in the Sheopur and Shivpuri districts.

Meanwhile, the Indian Army is assisting disaster management officials from the state disaster reaction force (SDRF) and the national disaster response force (NDRF), which are already involved in the relief effort.

Madhya Pradesh floods: In ten points, here’s everything you need to know about the situation on the ground:
1) Following heavy rains in the Gwalior-Chambal region on Tuesday, up to 200 villages, mostly in the Sheopur and Shivpuri districts, are still submerged.

2) Narottam Mishra, the home minister of Madhya Pradesh, has declared that on Wednesday he will personally visit flood-affected districts in the Datia district to assess the situation.

3) According to the state’s chief minister, Shivraj Singh Chouhan, 1,171 villages in the Gwalior-Chambal region of Madhya Pradesh have been hit by severe rainfall.

4) The flooding in the Shivpuri and Sheopur districts is the result of “unprecedented” 800mm rainfall in the last 24 hours, according to Madhya Pradesh Chief Minister Shivpuri Chouhan.

5) According to state additional chief secretary (Home) Rajesh Rajora, the Indian Army has been assisting with relief activities in the districts of Shivpuri, Sheopur, Gwalior, and Datia. For each of the three districts impacted by the floods, one column of the armed forces has been mobilised.

7) The SDRF has deployed seven teams to the Shivpuri district to help with relief efforts. The SDRF has sent five and two teams in the Sheopur and Datia districts, respectively.

8) MP CM Shivraj Singh Chouhan spoke to Union defence minister Rajnath Singh on the issue, thanking him for the quick response of the military forces and briefed him on the flood situation and rescue efforts. The CM also discussed the problem with Prime Minister Narendra Modi, who assured the state administration that it will receive all required assistance in dealing with the floods.

9) According to a railway official, due to repair work between Padarkhed and Mohana, numerous trains running through the Shivpuri-Gwalior line are either diverted or terminated at the originating stations. Heavy rains swept away a large piece of a bridge over the Sindh river at Ratangarh temple near Datia town, according to a police official.

10) Shivraj Singh Chouhan, the chief minister of Madhya Pradesh, chaired an emergency meeting at the state secretariat in Bhopal on Tuesday to monitor the rescue operations and examine the flood situation in the Gwalior and Chambal divisions. According to the CM, an aerial inspection of the flood-affected areas of the state will be conducted soon. “I am in touch with collectors and other officials of the flood-affected districts and people were sent on high-places for safety where relief camps too were started,” he said, adding that the situation in the rain-soaked Shivpuri, Sheopur, Bhind, and Datia districts is being closely monitored.