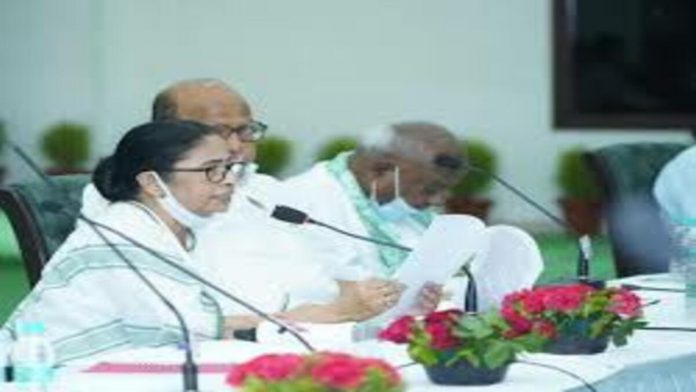 Meeting of leaders of opposition parties called by West Bengal Chief Minister Mamata Banerjee was held at Constitution Club in New Delhi  on Wednesday. During the meeting NCP Chief Sharad Pawar’s name was again cited to stand in the presidential elections, but he denied the offer.

After the meeting, the Ms Banerjee said,”Several parties were here today. We’ve decided we will choose only one consensus candidate. Everybody will give this candidate our support. We will consult with others. This is a good beginning. We sat together after several months, and we will do it again.”

The other names suggested by the TMC supremo included Gopalkriahna Gandhi and Farooq Abdullah from the opposition for the upcoming presidential elections.

According to the sources, the Union Defence Minister Rajnath Singh had called up many opposition leaders on Wednesday to propose names for the presidential elections to be held next month. When the government’ proposed names were asked there was no answer hence, the opposition leaders also did not commit in their answers.

During the beginning of the Opposition meeting on Wednesday, Ms Banerjee said, “For us, the presidential election is a prelude to 2024. In the year of Azadi ka Amrit mahotsav, we have decided to field a common candidate who can truly serve as custodian of the Constitution.”

Taking out a dig at the centre the Bengal Chief Minister said during the last 8 years of ruling government, the so-called ‘acche din’ slogan has completely exposed the government.

She also alleged that the centre-state relations have reached its lowest during the tenure of BJP government and the BJP has even attacked on the federal structure that has reduced the state level to municipality, said the sources.

The Bengal CM even alleged that there is an increasing of central agencies to target opposition leaders by the central government.