‘No Oxygen Tanker shoukd Be stooped Or Stranded,’ Says PM Modi In His Virtual Meet With State CMs 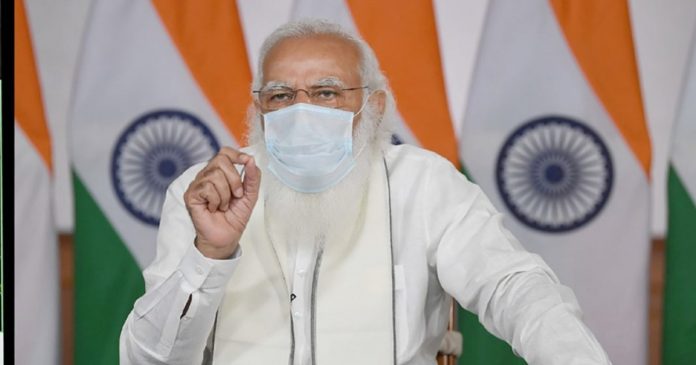 During his virtual meeting with the Chief Ministers of the 11 states and UTs worst hit by the second wave Prime Minister Narendra Modi on Friday assuring centre’s full support has asked the CMs to set-up a high-level level coordination committee for timely delivery of oxygen to the hospitals.

Referring to various reports coming from different parts of the country PM Modi has also asked the Chief Minister to keep a check on “black marketing” of oxygen and medicines.

Friday’s meeting came in a view of country’s every day positivity rate reaching staggering 19.12 percent, with 3,32,730 cases and 2,263 deaths reported in most recent 24 hours. India’s active caseload has arrived at 24,28,616 with five states – Maharashtra, Uttar Pradesh, Chhattisgarh, Karnataka and Kerala — in total contributing to 59.12 percent of it.

In the meeting, Modi also ordered the CMs to ensure that “no oxygen tanker, whether it is meant for any state, is stopped or gets stranded”. While the coordination committee “should ensure that as soon as there is allotment of oxygen from the Centre, it can deliver oxygen as per requirement in different hospitals of the state immediately,” said Modi.

All possible ways to reduce the travelling time for the tankers are being worked upon, said the prime minister. Oxygen Express transporting oxygen filled tankers and then Air Force transporting empty tankers to save one-way travel time are the two key steps taken by the centre as of now, he added.

“There is a continuous effort to increase oxygen supply. All the concerned departments and ministries of the government are also working together. Industrial oxygen has also been diverted to meet immediate requirements,” said PM Modi.

“PM Modi assured Centre’s full support to all the states in this fight. He added that the Ministry of Health is also in touch with the states and is monitoring the situation closely and issuing necessary advice to the states from time to time,” said a statement from Prime Minister’s office (PMO).

In the meeting, Dr. V K Paul who heads Centre’s Covid task force also presented a roadmap to states to ramp up the health facilities and for treating patients by setting targets.

Pointing out the two incidents of oxygen leakage in Nashik and a fire in ICU ward of a hospital in Maharashtra resulting in deaths of around 40 patients, the Prime Minister has asserted upon safety protocols in the hospitals and asked the state administrations to aware all the hospital staff about the safety measures in the hospital premise.