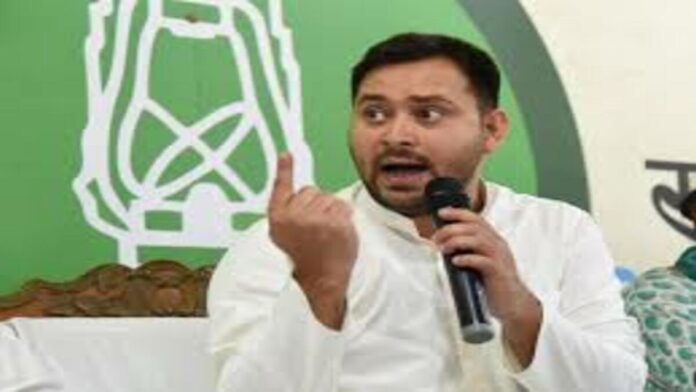 The return of Chief Minister Nitish Kumar to the “socialist family,” according to Tejashwi Yadav, the new deputy chief minister of Bihar, is a “slap in the face of the BJP.” He claimed that the BJP’s efforts to “intimidate or buy away” regional parties are intended to “kill off the politics of backward classes and Dalits,” as the majority of these parties support these social groups.

The RJD spokesman referenced Nitish Kumar’s previous connections to his father Lalu Prasad Yadav, who earlier this week abandoned the BJP and resurrected the JDU-RJD-Congress “Mahagathbandhan” (Grand Alliance). “In Bihar, the opposition against the BJP today includes all parties. Nitish-ji choose the appropriate course of action. Now, this will take place all throughout India,” Mr. Yadav remarked in Hindi.

He sidestepped a straight query about Nitish Kumar potentially running for prime minister of the opposition in 2024 by talking about what the BJP had pledged. He inquired sarcastically, “What happened to the 2 crore jobs a year?”

In response to a question on the jobs he promised to create in Bihar, he said it’s good that the BJP and media are “finally talking about pressing things” and moving away from “communal politics of Hindu-Muslim divide.” The fact that we had them deal with serious concerns is a success. We’ll stick to our word. Simply wait a short while.

He claimed to be following in his father’s footsteps. Lalu Prasad Yadav is also in Delhi getting better from medical concerns as he is out on bail in corruption investigations. “All of my father’s life, he has battled communal forces and campaigned for the underprivileged and social justice. The 32-year-old leader exclaimed, “Woh na dare, na jhuke.”

With his choice to form a new alliance with the RJD, Nitish Kumar “saved his philosophy,” the speaker continued.

Nitish Kumar, who had separated himself from Lalu Yadav and other members of the anti-Establishment movement of the 1970s, was the BJP’s partner from 2000 till 2013. He left the NDA because of Narendra Modi’s past, particularly the Gujarat riots of 2002, which were projected to be the PM face at the time. Nitish Kumar led the Grand Alliance (JDU-RJD-Congress), which won Bihar in 2015; Tejashwi served as his deputy. However, in 2017, he returned to PM Modi’s BJP. He has now made the opposite.

“We have both leveled accusations against one another. But our family is one. Regarding the back-and-forth, Tejashwi Yadav remarked, “We are all socialists.

Even when they were on opposing sides of the assembly, he recalled instances of goodwill. Nitish-ji once referred to me as his “bhai samaan dost ka beta” when there was a lot of disturbance in the House (son of a brother-like friend). Another time, he instructed me to “Babu baith jao” (sit down, son) in a way that seemed both loving and benevolent. I got comfy.

Tejashwi Yadav discussed a bigger plan of action connected to the BJP’s alleged usurpation of parties.

Regional parties are primarily made up of Dalits and members of the underclass. Nitish ji comes from an underdeveloped area. The Ram Vilas Paswan party was split by the BJP as well, he claimed. “The country won’t have an opposition if there are no regional parties. That will also destroy democracy. The BJP aspires to monarchical rule.

He listed Madhya Pradesh and Maharashtra as states where the BJP won elections after governments fell during their terms of office. In Jharkhand, they were attempting the same thing. We are now aware of the drama.

He accused political abuse of the federal government’s investigation institutions, saying “The ED and CBI are today worse than a local police station.”

However, Mr. Yadav’s trip to Delhi is related to more pressing issues, such as selecting the new Bihar government’s ministers. Along with Mrs. Gandhi, he also met Sitaram Yechury of the CPI(M) and D Raja of the CPI in this context.

Early next week, he and Nitish Kumar’s small cabinet are expected to grow.

The legislature will then meet in extraordinary session at the end of the month to confirm the new government’s majority.