Nitish Kumar To Be Sworn In As Bihar Chief Minister For 8th Time, Tejashwi Yadav To Be His Deputy 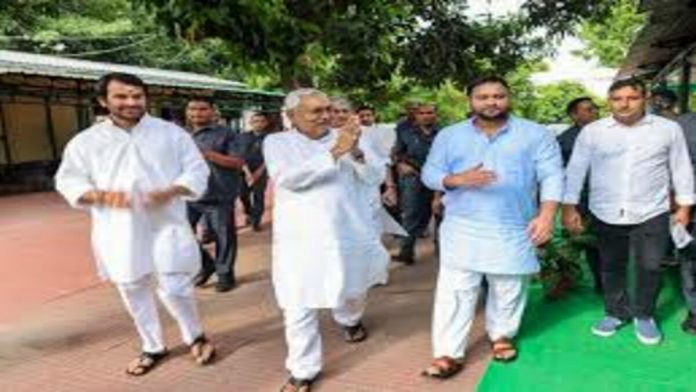 After breaking ties with BJP on Tuesday, Mr Nitish Kumar is set to take oath as Bihar Chief Minister for the eighth time today. The new “Grand Alliance” announced by him include RJD’s Tejashwi Yadav and other Opposition parties.

According to the sources, Tejashwi yadav is set to be sworn in as the Deputy Chief Minister along side Nitish Kumar. However, no other MLA is likely to he sworn in today.

Following his second meeting with the Governor on Tuesday, Mr Kumar said, “Mahagathbandhan (Grand Alliance) of seven parties, one Independent will work closely”. During the first meeting, Mr Kumar resigned, who was part of an alliance between Janata Dal United and BJP and just an hour later, he returned back along with Tejashwi Yadav and other leaders from Opposition and said they should form a new government with their accumulated strength.

After his first meeting with the Governor, Mr Kumar had said, “I have resigned, I have informed all my MLAs”. The reason he citied for splitting from BJP for the second time in nine years is the response he received during an interaction with his party members.

Meanwhile, BJP has alleged Nitish Kumar of breaking trust of people by switching partners in the middle term. The BJP has even announced a statewide protest against CM Nitish Kumar.

Back in 2013, Mr Kumar was in collision with BJP until he got to know that Narendra Modi was going to be the Prime Ministerial candidate. In 2015, he broke the ties with BJP and formed alliance with Congress and Lalu Yadav. Then again in 2017, Mr Kumar switched back to BJP citing that he could not tolerate Tejashwi Yadav’s wide corruption.