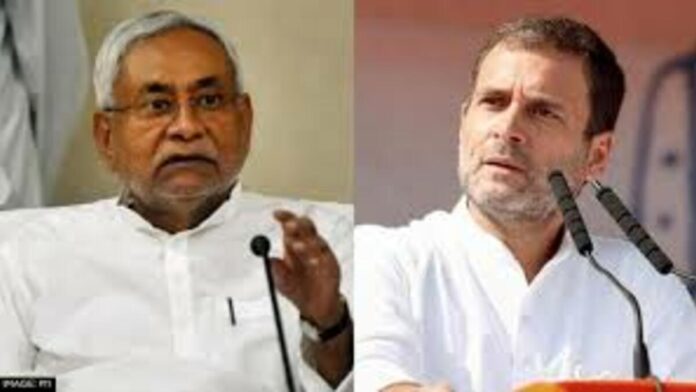 The first task on Nitish Kumar’s somewhat lengthy “to-do” list for his “Mission Opposition” in Delhi was completed Monday night when he met with Rahul Gandhi of the Congress at his Tughlaq Road mansion. According to sources, the conversation focused solely on 2024 and ways to bring the opposition together. At the conclusion, Mr. Kumar once more told reporters that he has no ambition to hold the position of power.

“Regional parties are being actively undermined. I’m making an attempt to bring the Opposition together before the general elections. I won’t put myself forward as a candidate for prime minister, “Mr. Kumar told journalists.

But despite Mr. Kumar’s numerous denials to the contrary, the rumour that he has his sights set on the Prime Minister’s position, which first surfaced soon after his split from the BJP, shows no signs of dying down.

While Mr. Kumar had expressed a desire to meet with the members of his new Mahagathbandhan alliance in Delhi, he also stated that the visit’s primary goal was to unify all of the opposition leaders, which was viewed as a formidable challenge.

He has a variety of folks on his list who he wishes to meet.

Arvind Kejriwal, leader of the Aam Aadmi Party and Delhi’s chief executive, is crucial among them. In 2019, attempts to bring him into the opposition coalition were unsuccessful due to the Congress’ strong hostility to the AAP’s participation in toppling the UPA administration at the Centre.

The second figure Mr. Kumar is interested in meeting is HD Kumaraswamy, the leader of the Janata Dal Secular, who broke off his coalition with the Congress after their attempt to form a government in Karnataka failed.

The efforts to create the opposition front were underlined by the Congress-JDS alliance’s creation in 2018 to prevent the BJP from taking power in Karnataka.

In addition, Mr. Kumar is anticipated to meet with the leaders of the Left, which is supporting his government in Bihar from the outside, as well as the head of the Nationalist Congress Party, Sharad Pawar, who was the driving force behind efforts to unify the opposition in 2019.

The Bihar Chief Minister is soon expected to travel to Maharashtra, Haryana, and Karnataka as part of his “Mission Opposition,” according to insiders in Mr. Kumar’s Janata Dal United.

K Chandrashekar Rao, the chief minister of Telangana, visited Patna last week to begin off this process. Mr. Rao, who had previously advocated for a non-Congress, non-BJP front, signalled that he was open to new ideas. When questioned about it, Mr. Kumar remarked sharply, “Why Third Front, we are working on the main Front.”