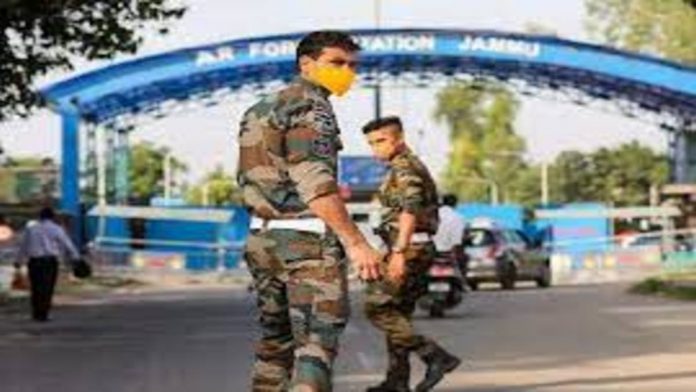 Two blasts took place at an Air Force base in Jammu Airport earlier on Sunday. It was said to be the first terror attack on Indian military facility with use of drones.

The blast took place before 2 am at high security airport situated nearly 14 km from the Pakistan border. Two Indian Air Force (IAF) personnel have suffered injuries in the explosions.

Out of the two blasts, one blast caused damage at the roof of a building in a technical area and another blast was exploded in an open area.

“The attack at the IAF station in Jammu is a terror attack,” the chief of Jammu and Kashmir police Dilbag Singh said.

The FIR in the case has been registered under the anti-terror Unlawful Activities (Prevention) Act and the probe is taken over by the National Investigation Agency.

The other teams indulged in the probe are the teams of IAF, forensic experts, the Jammu and Kashmir Police and National Bomb Data Centre.

“Drones with payload were used in both the blasts at Jammu airfield. Another crude bomb was found by the Jammu police. This IED was received by a Lashkar e Taiba operative and was to be planted at some crowded place,” Dilbag Singh told media.

The Jammu Airbase is a dual use facility which also operates passenger flights. However, there was no disruption in operation of flights, said Jammu Airport director Parvat Ranjan Beuria.

The attack took place just a few hours before the Defence Minister Rajnath Singh and the Army Chief General MM Naravane started their three day visit to Ladakh to see India’s preparedness and to talk with the troops in the backdrop of the pulled out standoff stalemate.

Reportedly, Pakistan is using drones to drop weapons across the border for over two years now.

The first related incident to this was when in August 2019 a crashed drone was found in a village of Amritsar in Punjab.