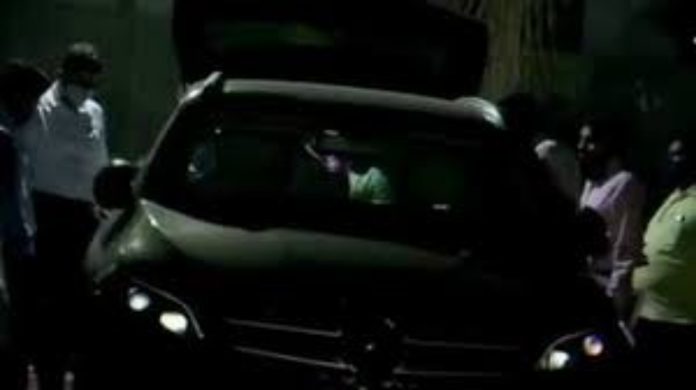 In its investigation in Industrialist Mukesh Ambani security scare case the National Investigation Agency has seized a black Merceded-Benz-car, which is said to be driven by the arrested Mumbai cop Sachin Waze. The investigation team has also found Rs 5 lakh cash, some clothes, a note-counting machine and the number plate of the alleged white Scorpio from Mercedes.

“NIA today seized a black Mercedes-Benz car. We have recovered the number plate that was on the Scorpio car, over ₹ 5 Lakh in cash, a note-counting machine and some clothes…Sachin Waze used to drive this car… the ownership of the car is under investigation,” told a senior NIA officer Anil Shukla to media persons.

The officials also said that they found a bottle of Kerosene and a check shirt in the clothes. Earlier in the investigation the CCTV footage revealed that a PPE-clad man in the footage who is now suspected to be Mr. Waze, was also wearing a check shirt. It is being believed now that the kerosene must be used for burning the PPE kit.

The white explosive-laden Scorpio was found abandoned near Antilia, Ambani’s residence on February 25, the Scorpio also had a threat not to Mr Mukesh Ambani and his wife Nita Ambani. Later in the investigation it was found out that the SUV belonged to a Thane-based auto parts dealer Mansukh Hiran, who on February 17 had filed a stolen report for the same.

The dealer was found dead on March 5. After his death his wife informed that the investigating officer Sachin Waze used Hiran’s Scorpio for months which he returned on February 5. She also alleged Waze of being involved in his husband’s death.

After a few days in the investigation, the case was then transferred to NIA from Mumbai Police. The NIA last week arrested Sachin Waze on the basis of allegation of placing the SUV near Antilia and using the same SUV for months. The agency questioned him for hours on Sunday after his arrest.

The NIA on Monday alleged Waze of erasing the CCTV footage of his apartment, it then searched his office where his laptop, mobile phones and tablet were seized by the agency.

The state ruling government Shiv Sena alleged the Centre for transferring the case to NIA as it the Mumbai Police and Anti-Terror Squad was capable enough of handling the case. The party also said that the Centre’s move will demoralize the Mumbai police officials.

“Sachin Waze is not Osama Bin Laden. It is not right to target a person and hang him and then investigate,” said the Chief Minister Uddhav Thackeray. Those who are involved in the act will not be spared, he added.

The BJP on the other hand have alleged the Chief Minister for saving Mr Waze as he is a former Shiv Sena member.