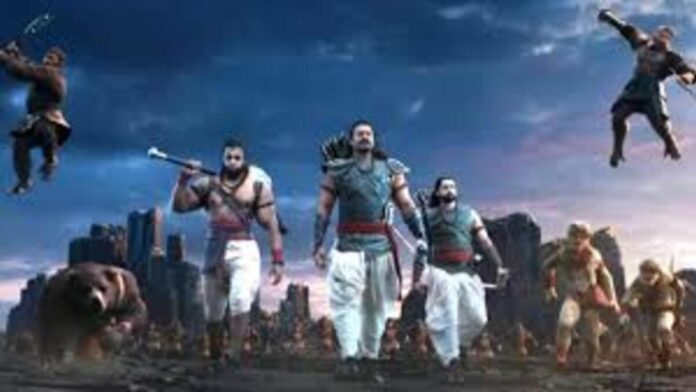 Adipurush by Om Raut has released its first teaser trailer, and things do not seem good. Prabhas plays Lord Ram in the movie, Saif Ali Khan plays Lankesh, and Kriti Sanon plays Sita. Although the film heavily utilizes CGI and VFX, it is based on the Hindu mythical text Ramayana.

The teaser depicts Lord Ram submerged in meditation while devils swirl in from all sides. When we catch our first view of Saif’s Lankesh with ice-blue eyes praying at a mountain, he prepares his arrows to shoot a few of them. He is also shown bragging about his ten heads to a woman who is seated at his feet. On the other side, Lord Ram is joined by his own army, which includes Laxman and Hanuman with the vaanar sena. He rides a demon-dragon-creature into combat.

A brief sight of Lord Ram grinning at Kriti’s Sita as she swings in a meadow is shown. The fight between the demons and the vaanar sena in Lanka is depicted after that. And it all appears quite ugly. The CGI is a long cry from Prabhas’ own Baahubali trilogy and reminds one of pre-2010 Bollywood.

Om Raut’s follow-up film to the hugely successful Tanhaji: The Unsung Warrior will be called Adipurush. Bhushan and Krishan Kumar of T-Series, Raut, Prasad Sutar, and Rajesh Nair of Retrophiles are the producers of Adipurush. The film is expected to be released in IMAX and 3D on January 12, 2023.

Prabhas has previously stated in a statement regarding the movie: “Playing a character like this comes with immense duty and pride, yet every role and every character comes with its own obstacles. I’m quite eager to play this huge character, especially the way Om imagined it. I have no doubt that the nation’s youth will adore our movie.

Prabhas had previously appeared in Saaho and Radhe Shyam, two of SS Rajamouli’s Baahubali films. Along with Salaar, he has a movie with Deepika Padukone coming out soon. Om Raut and Saif last collaborated on the film Tanhaji: The Unsung Warrior. His most recent film, Vikram Vedha, stars Hrithik Roshan. In addition to Adipurush, Kriti Sanon also has Bhediya.