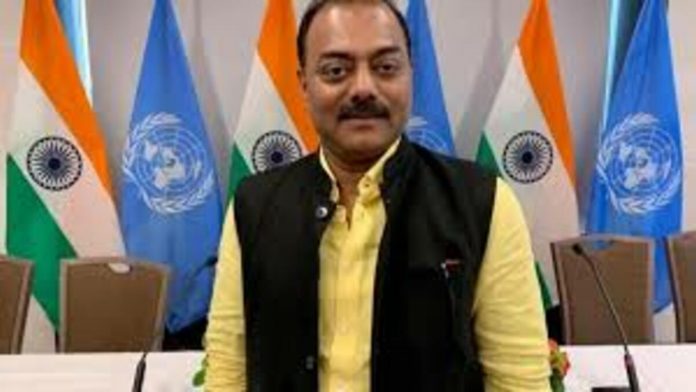 Jindal asked Kejriwal if this is the “change” he intends to bring to the border state, sharing a video of a rally of Khalistan supporters from Punjab’s Amritsar (where the AAP is in power).

A large rally is shown in the film, with people carrying Khalistani flags and police accompanying them.

“A rally of Khalistan sympathisers in Amritsar, Punjab, under the watchful eye of the police and administration, demonstrates that Arvind Kejriwal’s separatist government has extended throughout Punjab.” Was this the kind of transformation Kejriwal hoped to bring? Jindal’s tweet read as follows, approximately translated from Hindi.

Jindal had sent his second tweet of the day. He just composed “Jai Shree Ram” a few hours ago. He has, however, deleted his official titles from his Twitter account and replaced them with “proud Hindu” and “nationalist.”

On Sunday, Jindal was expelled from the BJP following a correspondence from Delhi BJP chief Adesh Gupta stated that the former’s comments on social media are detrimental to communal harmony and go against the party’s core ideals.

In the communication, Gupta stated, “Your primary membership is immediately cancelled, and you are ejected from the party.”

In addition to Jindal, BJP spokesman Nupur Sharma has been questioned about her remarks towards the Prophet. Sharma, however, was suspended from the party’s primary membership, unlike Jindal.

Jindal claimed that he and his family received death threats on social media shortly after his dismissal. He encouraged people not to give out his address and asked the Delhi Police Commissioner Rakesh Asthana and the Lieutenant Governor of the Capital, Vinai Kumar Saxena, to look into the matter.

On Sunday, the now-fired BJP leader clarified his June 1 remark on Prophet Mohammed. He clarified that the message was merely a question directed at those who assault and insult Hindu deities, and that it does not imply that he is “against any faith.” Jindal went on to say that he respects “all religions’ faith.”

Jindal, a former journalist, has previously been chastised for allegedly distributing a doctored video of Kejriwal on Twitter. In the aftermath, a case was filed against him in Punjab.

Meanwhile, Jindal and Sharma’s remarks against the Prophet have sparked outrage among India’s political elite, as well as severe criticism from a number of Muslim countries, the majority of which have close links with India.

The BJP distanced itself from the scandal before taking action against Jindal and Sharma, claiming it “respects all religions” and “strongly denounces the defamation of any religious figures of any religion.”

The Organisation of Islamic Cooperation (OIC), in addition to Islamic countries, condemned India for the incident. India, on the other hand, dismissed the remarks as “unwarranted” and “narrow-minded.”

“Some individuals were responsible for the disrespectful tweets and statements disparaging a religious figure. They do not represent the views of the Indian government in any way. Relevant bodies have already taken strong measures against these persons,” the foreign ministry said in a statement.