NASA Records A Successful Landing Of Its Perseverance Rover On Mars

Now in the mission the Perseverance will keep collecting 30 rock and soil samples for many upcoming years to send them back to earth for lab analysis most probably by 2030s. 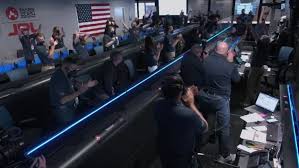 NASA’s Perseverance rover have finally on Thursday landed on the surface of Mars after being seven months in space. This successful landing on Mars will now begin the search mission for the signs of life on the Planet.

The procedure for how long it takes to return radio signal to Earth was completed 11 minutes before.

The Perseverance landing was praised by the US President Joe Biden.

“Today proved once again that with the power of science and American ingenuity, nothing is beyond the realm of possibility,” tweeted the President.

Now in the mission the Perseverance will keep collecting 30 rock and soil samples for many upcoming years to send them back to earth for lab analysis most probably by 2030s.

The rover size is as same as of an SUV which weights a ton. It has 19 cameras and 2 microphones, a suite of cutting-edge instruments to assist in its scientific goals and it is also equipped with two meter long robotic arm.

Before touching the surface of Mars, it had to overcome the dreaded “seven minutes of terror” — the risky landing procedure that has scuppered nearly 50 percent of all missions to the planet.

It then deployed a supersonic parachute the size of a Little League field, before firing up an eight-engined jetpack to slow its descent even further, and then eventually lower the rover carefully to the ground on a set of cables.

But the vessel had new landing technologies up its sleeve to help it navigate during descent, including the “Terrain Relative Navigation” that uses a special camera to identify surface features and compare them to an onboard map.