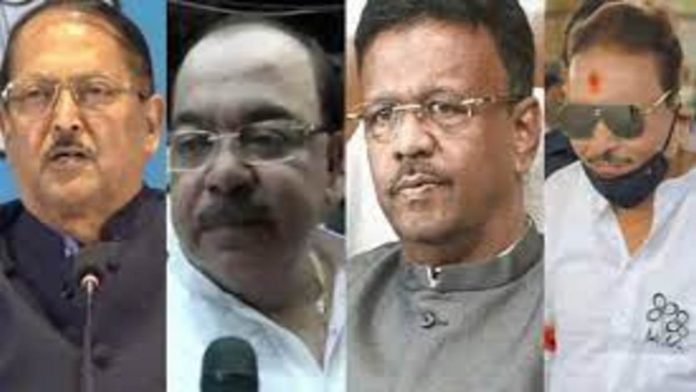 As the Calcutta High Court stayed the bail of the four leaders in Narada sting case the two leaders Subrata Mukherjee and Firhad Hakim spent Tuesday night in Kolkata’s Presidency Correctional Home, while MLA Madan Mitra and the former minister Sovan Chatterjee were hospitalised as they complained of illness.

The four TMC leaders were arrested by the CBI on Monday under the Section 120b of Indian Penal Code (Criminal Conspiracy) and the Prevention of Corruption Act.

The Narada sting case pertains to an online new portal Narada News, which conducted two-year-long sting operation. The vides shot in the operation were uploaded a few months before the 2016 assembly elections in 2016 that showed TMC leaders taking bribery in exchange of favours to the other party.

Both Madan Mitra and Sovan Chatterjee were hospitalised around 4 am on Tuesday. Mitra had recovered from Covid-19 and Chatterjee is diabetic patient told one of his friends Baisakhi Banerjee.

“I am having breathing trouble. We are elected representatives. We are not thieves and dacoits. They [CBI] should not have treated us like this,” told Mitra to media when he was being shifted to the hospital.

The other two arrested Subrata Mukherjee and Firhad Hakim could also be sent for check up, said a jail official. Mukherjee had also accompanied Mitra and Chatterjee to the hospital but later returned back to jail.

Firhad Hakim, who was chairing the Kolkata Municipal Corporation’s board of administrators supervising the Covid-19 management said, “They [CBI] did not allow me to save the people of Kolkata. I was in charge and looking after the management of vaccines, arranging ambulance, and disposing of the dead bodies in the city. I have full faith in the judiciary,” he told media.

Both Mukherjee and Hakim did not eat their dinner and went for a morning walk, said a jail official.

The case will be heard on Wednesday in the Calcutta High Court.