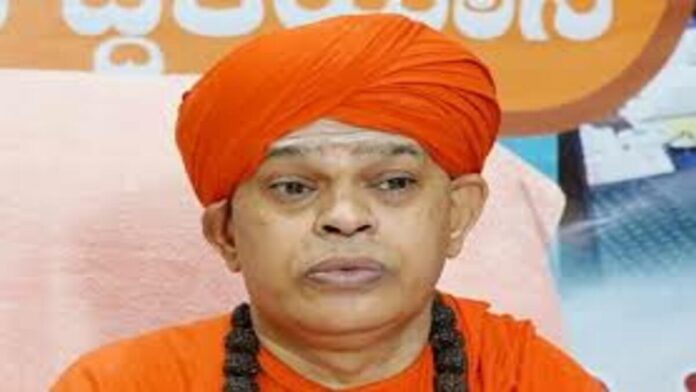 Shivamurthy Muruga Sharanaru, a Lingayat pontiff of the powerful Muruga Rajendra Mutt in Karnataka, was detained late on Thursday following claims of sexual assault against schoolgirls. After two adolescent girls claimed they had been sexually assaulted for years, he was named in a case under the Protection of Children from Sexual Offenses (POCSO) Act.

Questions have been raised about the dramatic case’s investigative backlog and the state of Karnataka’s major parties’ stony silence.

Despite being charged under the POCSO Act, the police appeared to be moving slowly.

In the state that is getting ready for elections, the arrest is also thought to have political repercussions.

Major Lingayat mutt recognised for its influence across party lines is the Muruga Rajendra Mutt. Politicians are observed making a beeline for Lingayat mutts, who are rumoured to maintain a non-partisan front. This is because the pontiffs’ blessings have significant symbolic value. Political figures and groups benefit from being able to claim the support they receive.

Lingayat mutts, such the Suttur Mutt and the Muruga Mutt, have an impact on how votes change during elections and who becomes the state’s chief minister.

BS Yediyurappa is a prime illustration of the influence a leader with mutt support may wield.

One of the first religious figures to officially defend Yediyurappa and pledge support was Muruga Mutt’s Shivamurthy in 2020, when rumours of the then-removal CM’s were rampant. Yediyurappa is a grassroots-level leader, Shivamurthy had stated when speaking to the media at the time. The party was entirely created by him. You shouldn’t disturb him. We are here to stand behind him and show our solidarity. His removal will be detrimental to the party.

Because the Lingayat minority is a significant voting bloc in Karnataka politics, the opposition Congress was also perceived as being very silent about the police inaction. Nearly 18% of the state’s inhabitants, or lingayats, are registered to vote.

Senior members of the Congress, such as Leader of the Opposition Siddaramaiah, who often would bash the BJP harshly, also remained silent. When Siddaramaiah left the Janata Dal (Secular) and attempted to create his own party under the AHIDA label in 2005, Shivamurthy supported him. Later, Siddaramaiah joined the Congress and was appointed state chief minister.

Former Congress president Rahul Gandhi also recently visited this mutt and received “Lingayat deeksha” or initiation into Lingayatism by Shivamurthy. Political observers claim that the action was taken to ensure the support of the mutt and its followers. It might no longer function as well.

Even though Basavaraj Bommai, the chief minister of Karnataka, had promised that the probe would be fair and that “the truth will come out,” campaigners claim that the administration appeared to be moving slowly.

Before the arrest, a senior police official told News18 that the investigation was taking its time because it involved a sensitive matter involving young children.

Prior to the girls’ detention, a social activist in Chitradurga who works closely with them said to News18: “The survivors’ statements have been recorded by the police. They have bravely protested the crimes committed inside the prison, but justice has not yet been served. They are hopeful that the state government would support them enough and see to it that they receive justice.

Following complaints of sexual harassment from two schoolgirls staying at the mutt’s hostel, the pontiff was charged under POCSO.

Along with the main pontiff, a junior priest, hostel director Parashivaiah Basavaditya, mutt employee Akkamahadevi Rashmi, and attorney Gangadharaiah have all been charged in the case. Based on a report made by the Mysuru-based NGO Odanadi Seva Samsthe, which assisted the victims in getting out of their predicament, a FIR was registered.

This is not the first time the mutt has been the target of a plot. For the previous 15 years, it has been present. All I can say is that I will come out clean because the accusations are untrue and without foundation. These conspiracies that have been hidden inside the mutt haven’t been exposed. Shivamurthy recently told the media that he “would provide full assistance to the probe and help carry it to the logical end as truth will win and innocence will be shown.”