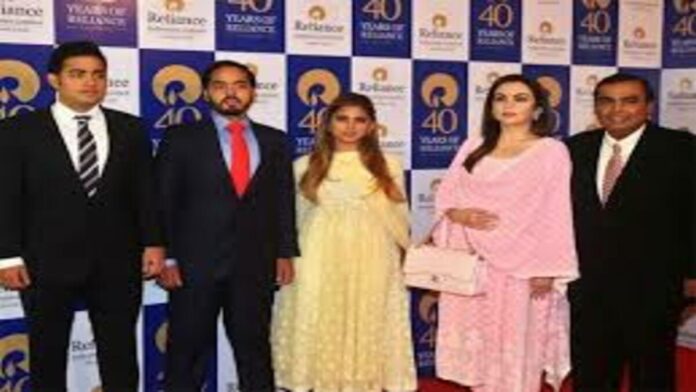 At the 45th Annual General Meeting of the business, Mukesh Ambani, chairman and managing director of Reliance Industries (RIL), stated, “At a time when a bright future is beckoning Reliance, what gives me optimism is our enormous pool of youthful, vibrant, and best-in-class talent. In all of our businesses, our next-generation executives are taking the helm with assurance.

According to Ambani, his sons Akash and Anant, as well as daughter Isha, have already risen to executive positions within the conglomerate’s enterprises. “Akash and Isha now hold executive positions at Jio and Retail, respectively. Since the beginning of our consumer operations, they have been fervently interested. Anant has enthusiastically joined our New Energy company as well. In reality, Jamnagar is where he spends the majority of his time, he declared in his statement at RIL’s annual general meeting on Monday.

But he emphasized that he was not yet retiring and that he would “continue to provide hands-on leadership as before.”

He continued, “All three of them have the founder’s (Dhirubhai Ambani’s) mindset.

Mukesh Ambani asked the shareholders for their support for these people, referring to them as the Young Leaders of Reliance. They are a part of a young group of professionals and leaders at Reliance who are already accomplishing incredible things. The chairman and the board of directors of RIL, among other senior officials, coach all of them on a daily basis, he claimed.

“All of our next-generation leaders are tenacious, laser-focused, and overflowing with original thought and innovation. They think broadly and quickly. They are capable of both dreaming big and carrying those dreams out, he continued.

Ambani continued, “I am convinced that Reliance Retail and its leadership team, led by Isha, will produce exponential growth and become the largest business inside the group.

“Reliance Retail’s purpose is to serve millions of customers every day through our physical stores, merchant partner stores, digital and omni-commerce platforms,” he said. “We do this by giving them unlimited choice, outstanding value proposition, superior quality, and unmatched shopping and delivery experience.”

Isha Ambani gave a presentation on placing online grocery orders using WhatsApp and making payments at the 45th Annual General Meeting of Reliance Industries after being introduced as the company’s leader. She also announced that Reliance Retail would start an FMCG (Fast Moving Consumer Goods) company.

According to her, the goal of this company is to create and supply items that address the daily needs of every Indian while being competitively priced.