“The support of political parties and leaders to this movement is welcomed, but in no case, the SKM's stage will be allowed for political leaders,” said a farmer leader Darshan Pal. 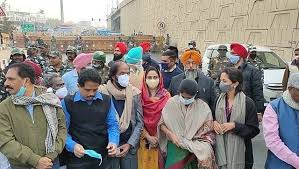 On Thursday Fifteen MPs from different political parties reached out to the central body of Kisan Unions the ‘Samyukt Kisan Morcha’ (SKM) at Ghazipur border to talk over famers’ protests where one of the members and farmer leader Darshan Pal from the Morcha repeated that the support from political parties is most welcome but the stand will remain apolitical.

“The support of political parties and leaders to this movement is welcomed, but in no case, the SKM’s stage will be allowed for political leaders,” said Pal.

Remaining apolitical has been the stand of these Kisan Unions since the beignning of the protests starting from 26 November 2020. The Kisan leaders also said that they cannot deny any political leader to come to their protest sites especially on the basis of anonymity as they need support in order to make their protests a pan-India movement. Many farmers’ unions linked with left parties are getting too much of support and a an union of All India Kisan Sabha are getting support from ground level in carrying forward the movement.

The Morcha leader Darshan Pal also said that no political leader is allowed to speak from any stage of Samyukt Kisan Morcha as people will think they are being funded from the unions in their favour for strengthening the Kisan movement and “This movement is completely farmers movement and we oppose all the baseless allegations against the farmers,” pal further said.

The fifteen MPs that visited to the Kisan unions at their protest sites included NCP’s Supriya Sule, TMC’s Saugata Roy, SAD’s Harsimrat Kaur Badal, Tiruchi Siva and DMK’s Kanimozhi and some from IUML, RSP and National Conference. However, they were not allowed to cross the barricades so they remain standing on the other side of the fence.

“Today 15 MPs representing different political parties from Kashmir to Kanyakumari went to Ghazipur Border to express solidarity with farmers and demand immediate repeal of the three hated farm laws. We also demand an end to atrocities being meted out to peacefully agitating farmers,” tweeted Harsimrat Kaur Badal who resigned from NDA alliance in her support to farmers after the announcement of the three farm bills in the Parliament.

Amid the allegations of profiteering on Covid-19 vaccines, Centre on Tuesday has fixed the maximum price limit for Covidshield, Covaxin and Sputnik V unto...
Read more
Editor's picks

The satellite images on Wednesday showed that China is pulling down the structures and moving vehicles to empty the Line of Actual Control (LAC)...
Read more
BUSINESS OPURTUNITIES

Budget 2021, A big boosting plan to revive the economy !

Union Budget 2021 announced a big spending plan focused on healthcare and infrastructure to revive the coronavirus devastated economy which has contracted to the...
Read more
- Advertisement -