More Than 1 Lakh Gathered At Kisan Mahapanchayat In Up. Bharat Bandh On September 27 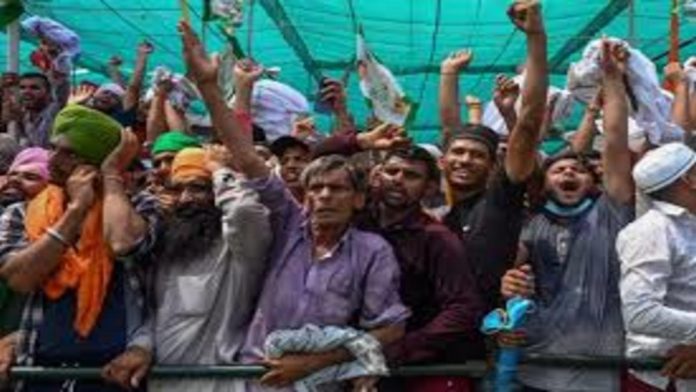 On Sunday, a significant number of farmers gathered at the Government Inter College Ground in Muzaffarnagar, Uttar Pradesh, for the mahapanchayat. While the district administration predicted a 1 lakh turnout, farmers’ groups claimed that 10 lakh people gathered in the city over the course of 24 hours for the “historic” conference. On September 27, farmers’ unions have called for a “Bharat bandh.”

“We have kicked off ‘Mission UP and Uttarakhand’ from this stage. We will not let BJP win the upcoming elections,” said a statement by the Samyukt Kisan Morcha (SKM), an umbrella body of 40 farmer organisations, which organised the mahapanchayat. “The Muzaffarnagar kisan mazdoor mahapanchayat will be remembered as a historic day and will prove to be a turning point in the Indian political landscape.”

The ground, which can house a lakh people, was packed to the maximum when the media arrived, with masses spilling out onto the streets and even onto the flyover close to the venue. Women and young farmers had flocked in droves. Farmers from 16 states had come to the mahapanchayat in Muzaffarnagar, according to SKM.

Announcing a farmer association for UP, like SKM, Tikait said it would “defeat the Yogi (Adityanath) government” in 2022. “They sold our rivers, our water. We will not let them sell our land … I will lay down my life if needed but will not leave the protest site until we emerge victorious,” he said. “The struggle for Independence went on for 90 years. I have no idea how long ours will continue.”

From the dais, several of these farmer leaders spoke for a minute or two, each addressing the crowd for a minute or two. They all stated that the demonstrations would continue until the government provided a “legal guarantee of MSP.” They claim that only 20% of the promised purchase has been completed. They stated that while the state administration promised loan forgiveness to 86 lakh farmers, only 45 lakh had received it. They further stated that the number of farmers in Uttar Pradesh who have crop insurance has decreased from 72 lakh in 2016-17 to 47 lakh in 2019-20.

“We will not give up. The government cancelled two trains in which farmers from Ambala and Delhi were coming to Muzaffarnagar. They stopped our buses on the highway. They installed jammers so there could be no live coverage,” as stated by Yudhvir Singh, general secretary of BKU.

The next meeting, according to the farmer leaders, will be held in Lucknow. “Yogi asked Tikait sahib to come to Lucknow,” a farmer leader said. “We have come up to Muzaffarnagar. We will soon be in Lucknow.”