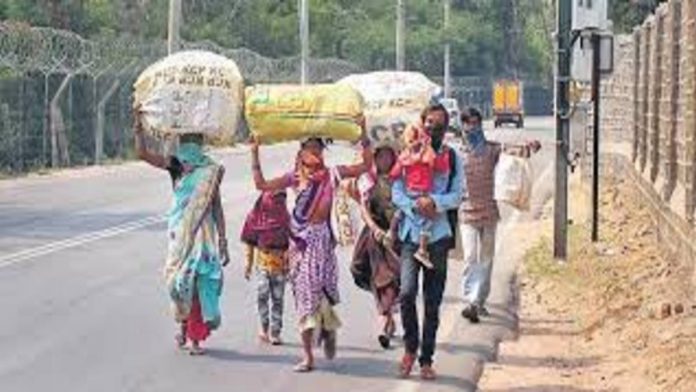 Amid Maharashtra remaining the worst affected state the migrant labourers in Mumbai have started leaving for their hometowns being feared of the second lockdown after worsely affected by the first national lockdown in during March-April last year.

This fear amongst the migrant labourers has risen after Mumbai was placed under a night curfew on Sunday and also the state is awaiting further restrictions on Friday. The city has reported 400 per cent rise in cases since as compared to February.

The reason behind their fear is genuine as over 100 million of migrant labourers in India live precariously are depended on their daily wages. Their work is never secure as they never get their wage if they do not work even in the case of sickness. The worst of all is that they did not even get any compensations even during the global pandemic.

Due to the national lockdown last year between the period of March last week to May end about 400 million Indians went into poverty because they were unable to do their work as factories were closed, constructions works were paused, street stalls were also closed.

Mostly migrants who are leaving the city soon after the night curfew on Sunday are travelling to the states of Uttar Pradesh and Bihar as these states are the biggest source of labour in Mumbai.

Reservations for some in Uttar Pradesh are already full till April 8. Last year tens of thousands labourers waiting on stations to go back to their towns in Uttar Pradesh, Bihar and West Bengal.

However, the Maharashtra Cabinet, which met on Sunday amid the sudden rise of cases in Mumbai and across the whole state must have decided something on the probability of lockdown but has not released any official statement yet. But it has released severe restrictions which everyone has to adhere to.