Meeting of India’s ‘Niti Aayog’ today, J&K and Ladakh To Be Part As UTs

Issues of Health, education, infrastructure, nutrition, growth and many others are likely to be discussed in the meeting. 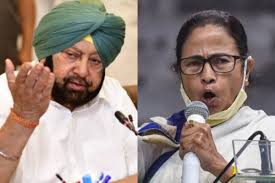 Prime Minister Narendra Modi is going to chair the 6th meeting of Niti Aayog, the Governing Council by video conferencing. He is likely to discuss issues of Health, education, infrastructure, nutrition, growth and many others with the state governments.

After the revocation of article 370 this is the first meeting of Niti Aayog in which the newly formed Union Territories of Ladakh and Jammu and Kashmir will also be included as Union Territories with all other states and UTs. The administrators who heads the UTs are also invites in this 6th meeting of the Government Council.

The Chief Ministers of West Bengal Mamata Banerjee and Amarinder Singh of Punjab are expected to not join the meeting. But in the place of CM Amarinder, Punjab’s Finance Minister Manpreet Singh Badal is likely to attend the meeting.

The CM of Bengal Mamata Banerjee has skipped meeting of Niti Aayog earlier also as she calls them a “fruitless” exercise and she had also said that the think tank of Niti Aayog has “no financial power” to support the states and UTs.