MEA Reacts On US Reactions On Farm Stir

MEA said the violence at Red Fort on Republic Day has given rise to the similar reactions and sentiments in India as the Capitol Hill incident. 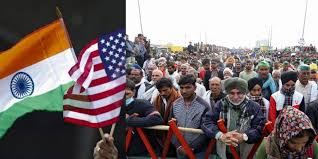 After the reactions from US, Ministry of External affairs in response to US reactions said that any protest should be considered in the “context of India’s democratic ethos and polity, and the ongoing efforts of the government and the concerned farmer groups to resolve the impasse”.

Referring the democracies of both India and US as vibrant and shared values the MEA said the violence at Red Fort on Republic Day has given rise to the similar reactions and sentiments in India as the Capitol Hill incident.

The MEA on Internet restrictions said that the internet shut down at the protest sites and nearby areas was to prevent any further violence.

“The temporary measures with regard to internet access in certain parts of the NCR region were therefore understandably undertaken to prevent further violence,” the ministry stated.

The Biden administration has stressed upon resolving the party differences “through dialogue” and on internet suspension it said that it was a violation of the fundamental rights, as “unhindered access to information, including the internet, is fundamental to the freedom of expression and a hallmark of a thriving democracy,” the administration said in a statement.

“We recognise that peaceful protests are a hallmark of any thriving democracy, and note that the Indian Supreme Court has stated the same. We encourage that any differences between the parties be resolved through dialogue. In general, the United States welcomes steps that would improve the efficiency of India’s markets and attract greater private sector investment,” said the US embassy spokesperson Ariel H. Pollock.

Not just Biden administration, pop star Rihanna also interjected in the farmers’ protests after which many celebrities from sports, bollywood including Swedish student activists Greta Thenberg and adult movie actress Mia Khalifa. However, they all were slammed by the government on Wednesday.

Calling the celebrities’ reactions neither accurate nor responsible the MEA said, “Before rushing to comment on such matters, we would urge that the facts be ascertained, and a proper understanding of the issues at hand be undertaken. The temptation of sensationalist social media hashtags and comments, especially when resorted to by celebrities and others, is neither accurate nor responsible.”

In last the MEA defending the three farm laws said, “The Parliament of India, after a full debate and discussion, passed reformist legislation relating to the agricultural sector. These reforms give expanded market access and provide greater flexibility to farmers. They also pave the way for economically and ecologically sustainable farming.”