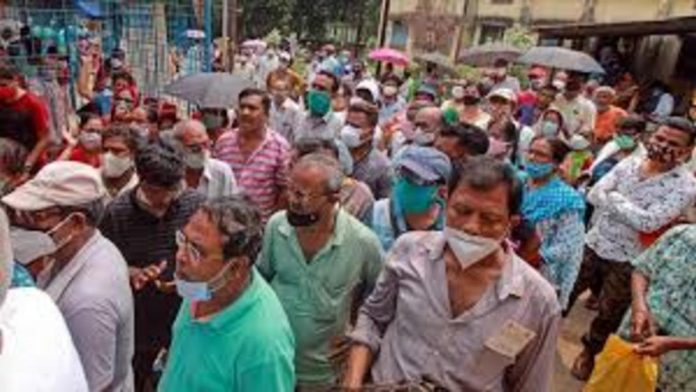 According to a mathematical model developed by researchers who correctly anticipated the tapering of a severe surge of cases earlier this year, India is likely to experience a rise in Covid-19 infections, which will build into a new though lesser virus wave that will peak in October.

According to estimates by researchers led by Mathukumalli Vidyasagar and Manindra Agrawal at Indian Institutes of Technology in Hyderabad and Kanpur, the country’s outbreak could worsen as soon as this month, with the next wave peaking at less than 100,000 infections per day in the best-case scenario and nearly 150,000 in the worst-case scenario.

In an email to Bloomberg, Vidyasagar said that states with high Covid rates, such as Kerala and Maharashtra, could “skew the picture.”

The next wave is expected to be much lower than the second, which peaked at over 400,000 daily instances on May 7 and then rapidly fell. However, given the possibility for new variants to emerge, the prognosis highlights the need for India to expedite its vaccination effort, implement surveillance systems to discover emerging hotspots, and keep cautious through genome sequencing.

Last October, the delta strain that is now causing new outbreaks around the world was discovered in India.

Experts are concerned that once diseases fade, people will get complacent and resume social and business activities. Last year’s outbreak in India faded with little harm, prompting a rapid return of local travel and large-scale celebrations, which prompted the emergence of a disastrous second wave in March. Researchers predict that up to 5 million individuals may have died in the outbreak due to overcrowding in hospitals and crematoriums. So far, the government believes that 424,351 people have died as a result of Covid.

The country’s almost 1.4 billion people also developed high levels of natural immunity as a result of the previous wave, a factor that could mitigate the impact of the upcoming surge. Last month, the Indian Council of Medical Research conducted a national antibody survey, which indicated that two-thirds of Indians over the age of six had been exposed to the corona virus.

Next Hotspot
In India, five months after the latest wave began, daily infections have stabilised at roughly 40,000 per day. For the previous five days, Kerala, in the southern state of India, has accounted for approximately half of all new cases, indicating that it could be the next hotspot.

Daily instances in Kerala and a few other north-eastern states have been steadily increasing since July, according to Paul Kattuman, a professor at the Judge Business School at the University of Cambridge, which developed a Covid-19 tracker for India. However, a few states experienced “short-lived flare-ups in July which abated relatively quickly,” leaving the country in a “steady state” for the time being.

“If infection begins to increase in a few large states, the present balance will tip, and cases are likely to begin growing again in the country as a whole,” Kattuman added. “We might expect to see a slow-burn in the country for duration this can be expected to last till vaccination coverage is sufficiently high to induce herd immunity.”

According to Bloomberg’s vaccine tracker, India has provided 470.3 million vaccine doses, yet just 7.6% of the population is fully vaccinated. The country’s delayed adoption has raised concerns that it may not be completely prepared for the next wave.

Prime Minister Narendra Modi’s government claims that it is now more prepared for future outbreaks and that future waves would not have the same economic impact as previous ones.

According to Ram Vishwakarma, an expert at India’s Council of Scientific and Industrial Research, public health officials need to conduct air and sewage water surveillance to detect virus clusters across city areas. This would detect potential infections before they become serious enough to require treatment in a hospital emergency department.

“Sewage water surveillance is the first indication that you start getting from a particular area,” he stated at a conference on July 28.

If India wants to save lives and livelihoods when the next wave hits, it will need to step up public health efforts and learn from past failures.